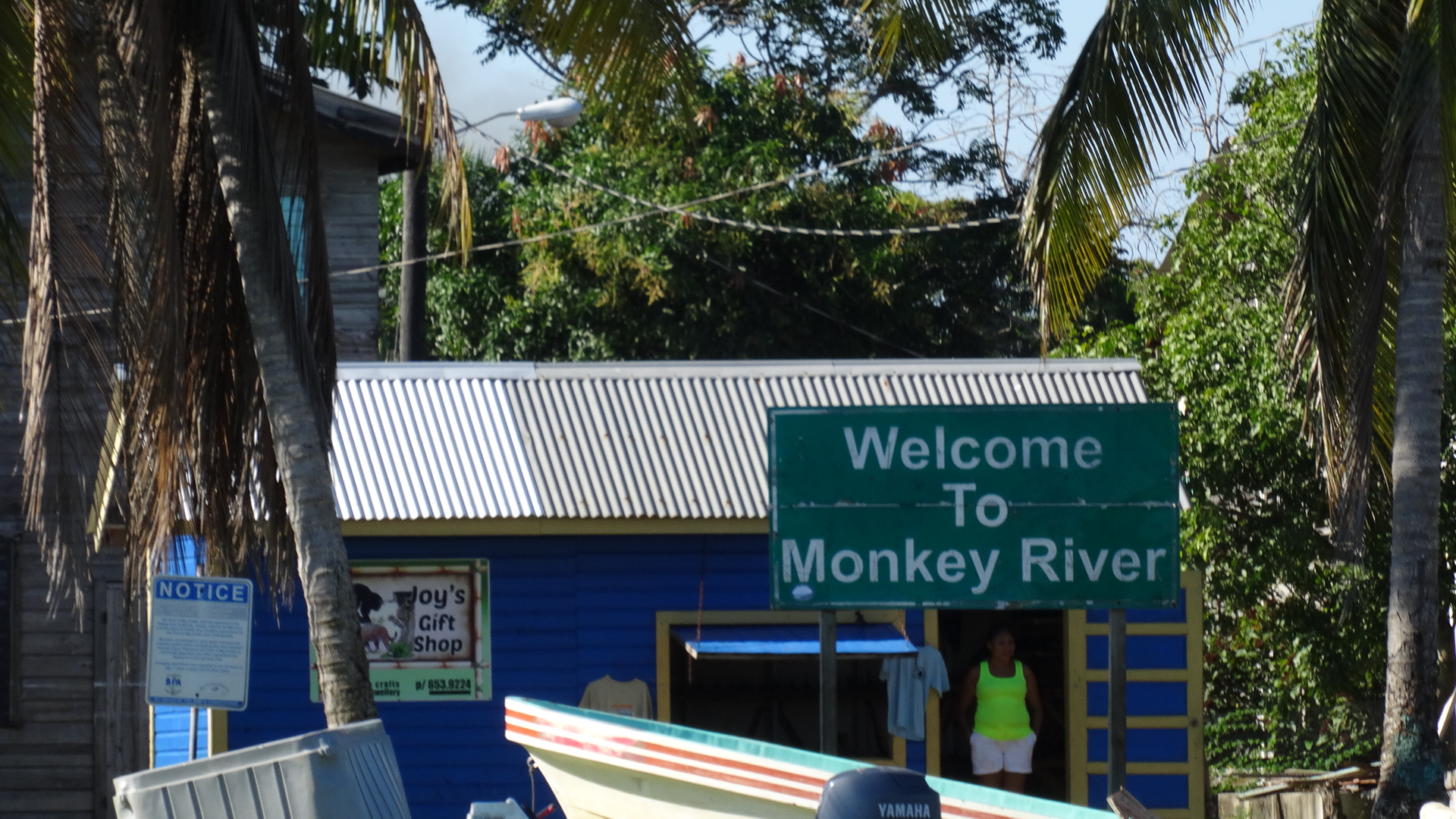 Monkey River Town and Percy – King of The Howlers!

On my first night in Belize all those weeks ago I had been captivated by the story of Monkey River Town; a small village situated on the Caribbean Sea near Placencia at the mouth of the Monkey River and one of the last purely Creole villages in Belize. My new American friends told me how the village had been destroyed by Hurricane Iris in 2001 and that Minister Ted, their group leader, had journeyed from America to help with its restoration immediately after the devastation. Since then he has been returning for a week each year with a group of friends to assist the 200 or so villagers to continue to maintain their village and sustain their traditional way of life. Weeklypacket.com

I’ve been told that if I make it to Placencia I should seek out one of Monkey River Town’s most well known residents, Percy, who is acclaimed to be highly knowledgeable in Jungle Medicine. He has a tour company Bare Bones Tours and shares his knowledge by taking groups of tourists from Placencia up Monkey River to the jungle where he will explain jungle medicine and point out the abundance of wildlife along the way.

Sure enough, my first enquiry which is at Captain Jak’s Cabanas and Tours about Percy is successful and I’m told with enthusiasm just how wonderful he is as I book a tour with him for the following day, which will include lunch at his sister’s house in Monkey River Town! 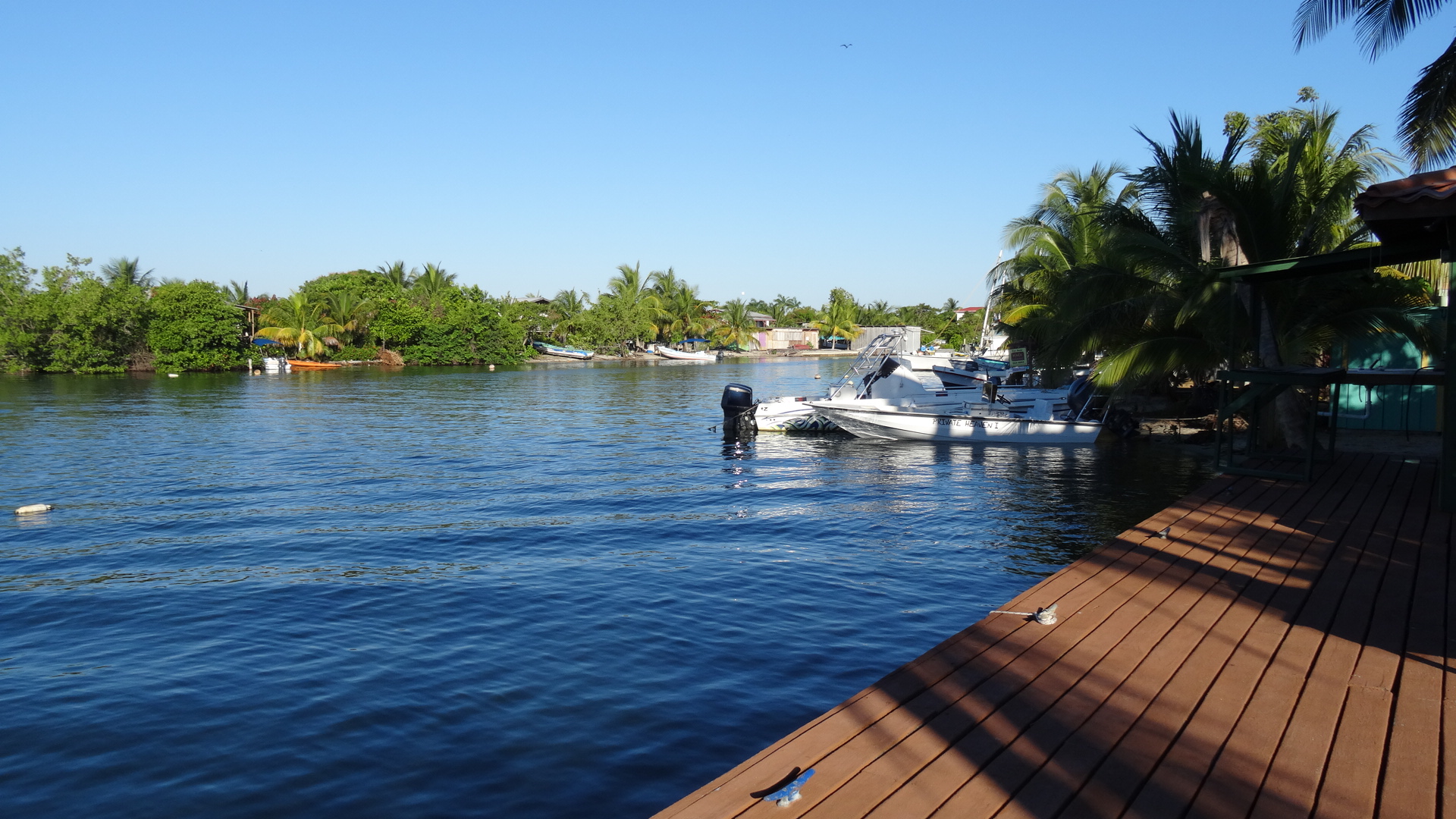 Waiting At The Lagoon Jetty Placencia For Percy

The next morning I arrive early at the lagoon jetty where Percy is to pick me up. I bask in the beauty of the early morning glory watching birds swoop on still blue waters catching insects in their wake, and with only a couple of days left until I return to the UK I use the time to reflect upon my journey so far.

Only three weeks ago I was in Belize City about to embark on my trip with much trepidation. I had listened with awe to stories of a fascinating village called Monkey River Town situated somewhere far away in southern Belize and thought it might be fascinating to visit if ever I got that far. I had no idea what lay ahead of me then and only had some vague plans for my itinerary, but here I am today finally about to visit Monkey River Town having safely navigated my way around Belize with ease.

I’ve grown as a person enjoying many incredible experiences and meeting an abundance of warm and generous people along the way. Somehow this moment is a poignant marker of both the beginning and end of my journey; it is a rare moment of self-actualisation and as Percy’s boat motors towards me I am overwhelmed with emotion.

However, sentimentality is quickly replaced with excitement as Percy pulls alongside me and greets me with an enormous and rather mischievous grin. It is immediately evident that he is a huge character and I just know this is going to be a special day. 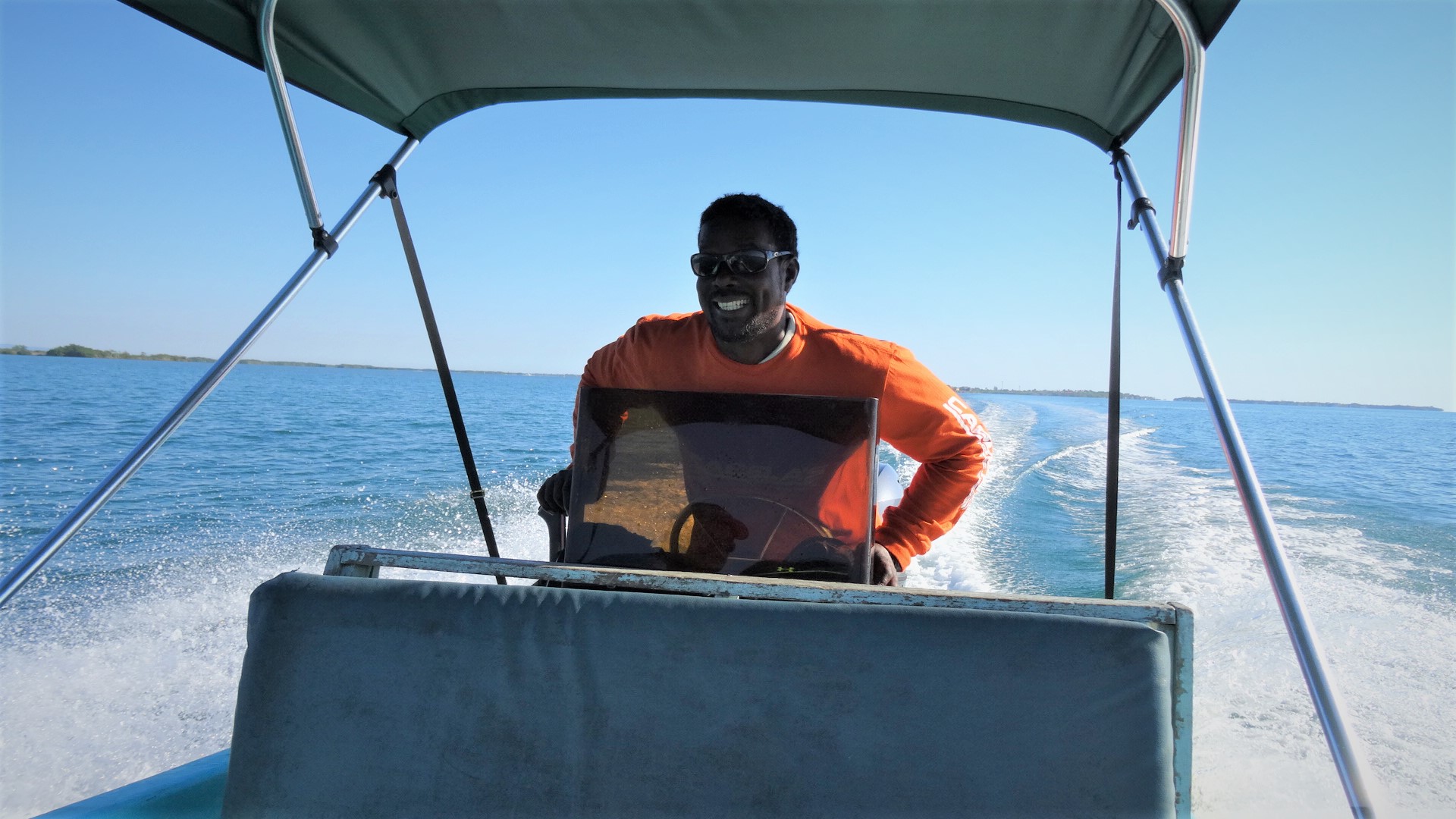 My other two companions are a friendly couple from America and I am selfishly delighted that it is only going to be the three of us on the tour with Percy. We quickly speed away from Placencia and make our way along the coast line, heading for Monkey River Town and the mouth of Monkey River where I am finally rewarded with my first glimpse of this little Creole Village perched on the edge of a little peninsula between the Caribbean Sea and the river mouth. Wooden houses are dotted between palm trees and enveloped with undergrowth. It is immediately apparent that there are no streets as grass grows thickly in the open areas between the few houses that we can see from the boat. 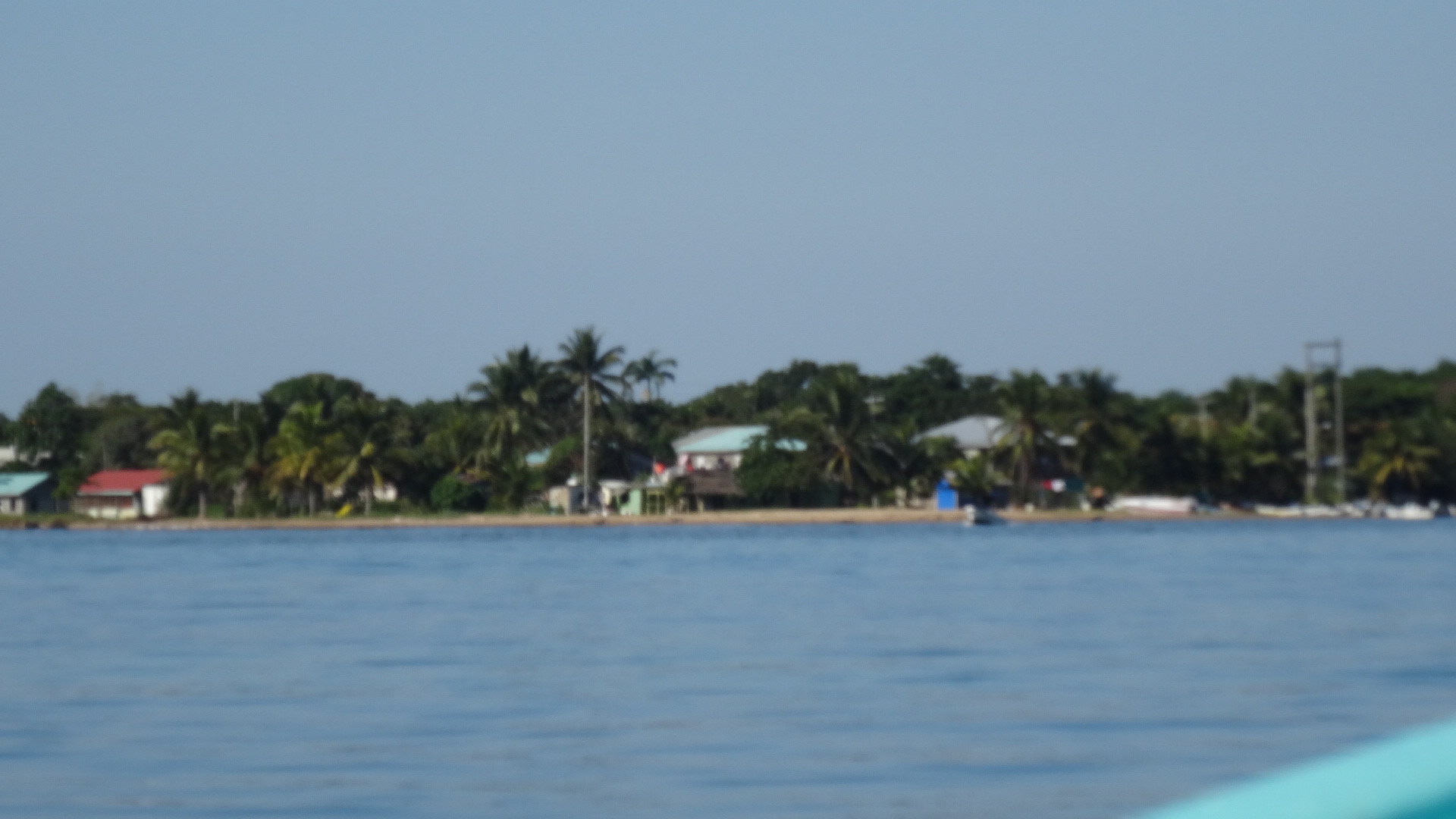 However, we are not stopping at the village yet and carry on past, entering the river mouth to begin our journey up the river which will take us deep into the jungle.

Percy is indeed incredibly knowledgeable and time and time again he quickly pulls the boat up and excitedly points out a reptile, bird or some other animal. The creatures are extremely well camouflaged and I struggle to see them, often only catching a glimpse as our approaching boat motivates them to slide into the water or fly off. I am completely amazed by Percy’s ability to spot something as small as a cluster of tiny bats clinging like rough patches of bark to a tree or an Iguana completely hidden, it’s colours blending in with the foliage high up in the jungle canopy. He points out colonies of hanging Oropendola nests and explains how these lovely birds work as a community to protect each other’s young. 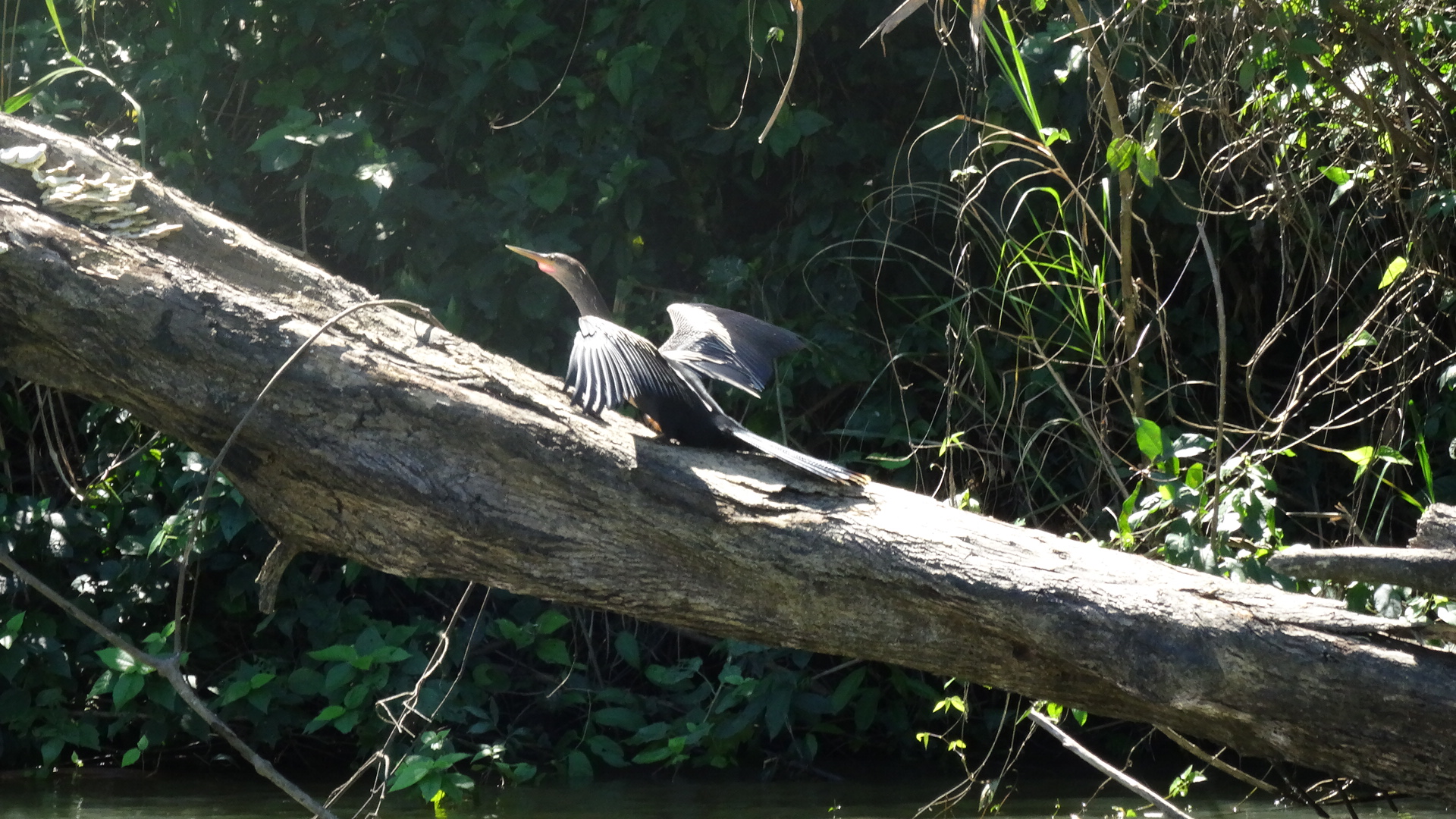 A River Bird Sunbathes On A Tree Trunk

There are crocodiles in the river and in answer to my question Percy advises me that “No, crocodiles have never attacked anyone in Belize. They have in Mexico to the North and Honduras to the South, but never in Belize!” It seems that even the Belizean crocodiles are especially friendly and laid back! 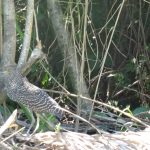 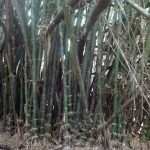 Cane Grows Deep In The Forest 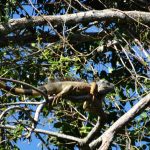 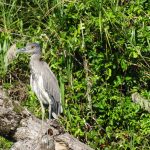 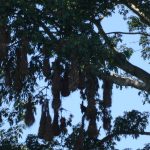 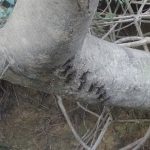 Bats Camouflaged On A Branch 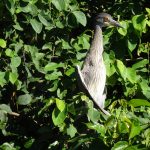 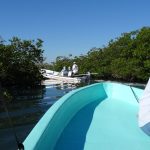 We pass waterside bushes with leaves that will cure liver and kidney problems and berries that will help cancer. There are cures for boils and tree bark that can be scraped and packed into open wounds to stop bleeding in an emergency. Once we disembark and head into the jungle, Percy, with machete in hand, finds a particular tree and cuts a piece of bark out for us to use as antiseptic on our mosquito bites. I am covered in DEET insect repellent, but it is no barrier against the multitude of bites I am receiving from the aggressive jungle mosquitoes and I welcome the jungle medicine to sooth my skin.

There are trees that ooze a sticky white glue like substance when the bark is cut; a useful resource with many uses. In the event that you might need camouflage or have lost your clothes there are large Adam and Eve style leaves that will stick to you. 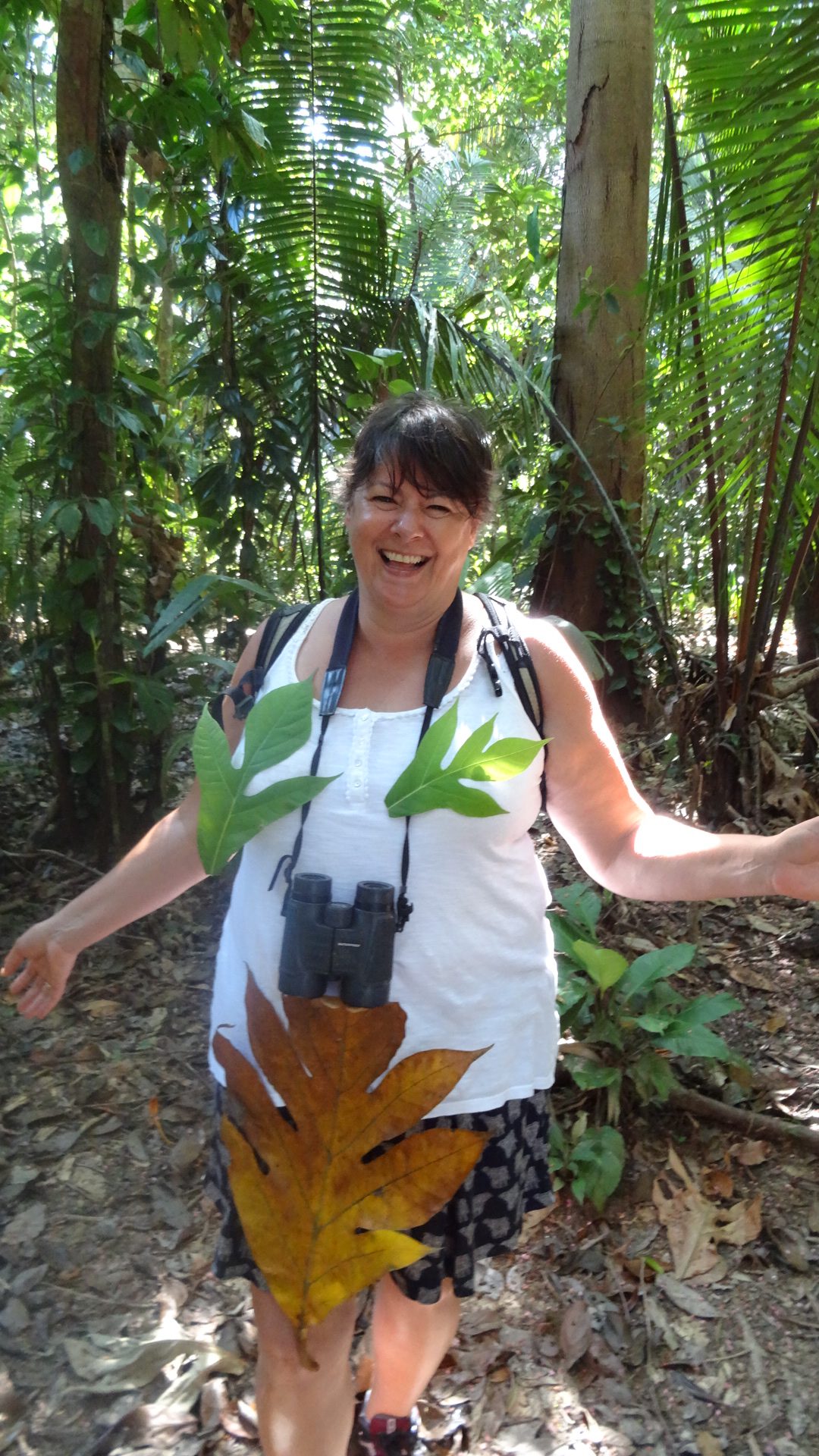 Percy shows us holes in the ground made by fallen trees that are used as natural animal traps. He often hunts wild boar and shows us their hoof prints in the muddy footpath. We are in Cheetah territory, the most revered Belizean animal and while we have no chance of spotting this stealthy creature Percy assures us that we, on the other hand, are being watched intently!

He leaves us alone for a moment while he goes off to fetch a wild boars skull which is nearby, left from a kill he made some months before. He only leaves us for a moment but I look around and am surprised how quickly he has disappeared into the undergrowth. It dawns on me how vulnerable we are in the dense jungle alone and know that I could not find my way back to the boat without Percy’s aid. Relieved to see him return we all gather round the bleached white skull as he expertly cracks its jaw with his machete, extracting the tusks and giving us one each as a souvenir of our jungle visit.

We head further into the jungle and are now in Howler Monkey Territory. The ground is strewn with monkey droppings and Percy warns us not to look up with our mouths open! He has many skills, but his best one now comes to the forefront as he starts whacking the tree trunks noisily with his machete and howls deeply and loudly, mimicking exactly the territorial warning call of the Howler Monkey. 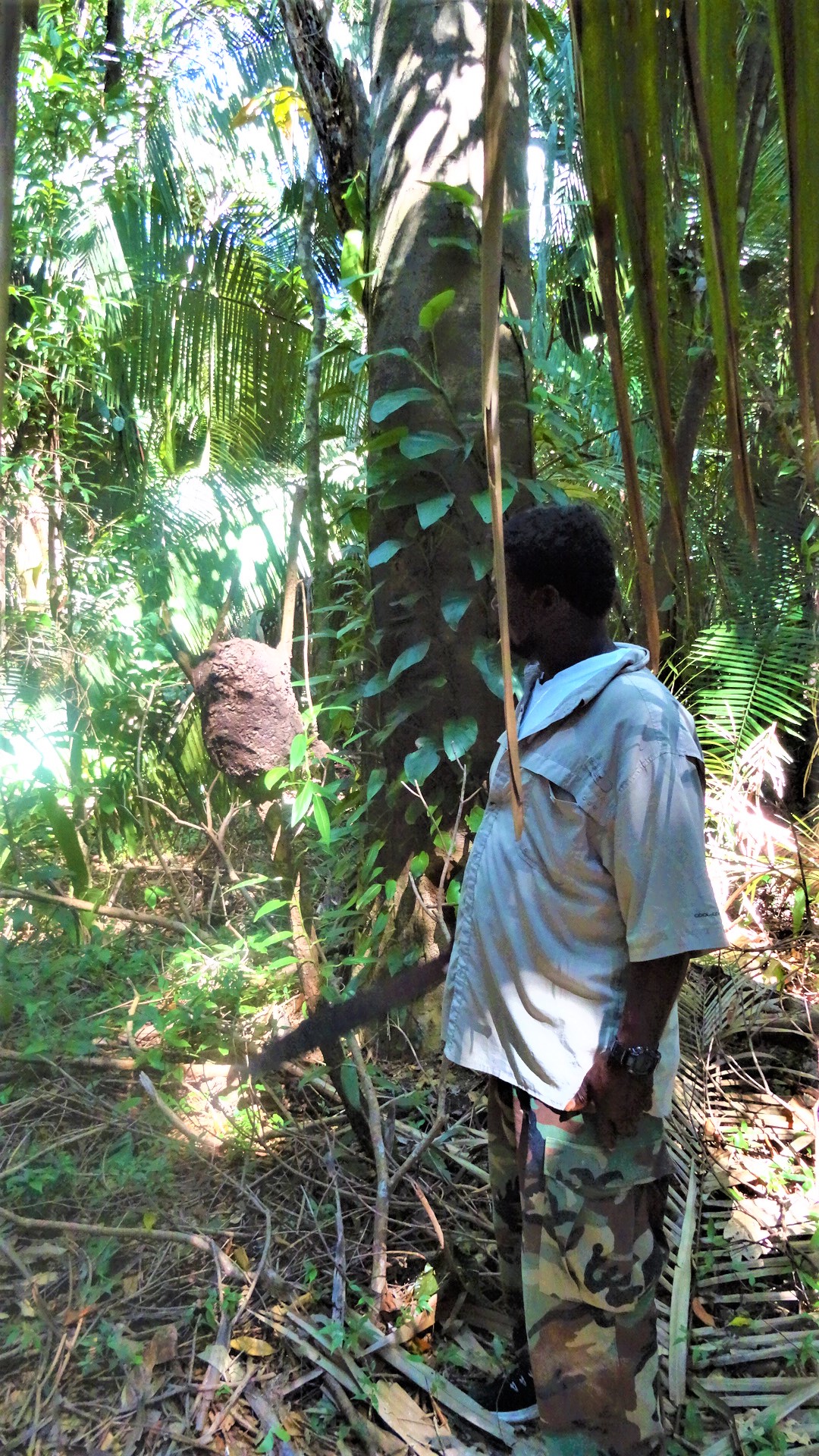 Percy With His Jungle Tool His Machete

Immediately the jungle canopy bursts into life and mayhem erupts as previously hidden monkeys start leaping about, visibly agitated by the perceived threat to their territory and retaliate with their own incredibly loud howls. The noise is deafening but we all look up, mouths open in wonderment as we watch the monkeys, some with babies in tow leaping from branch to branch directly above us!

Eventually we return to the boat and speed back towards Monkey River Town. Percy tells us a little bit about village life. He left school at an early age because there was no access to secondary schools as there weren’t any roads out of the village, but now there is one nearby which links the village to Placencia. The children still need to be ferried to a waiting bus on the road, but now they have better access to the outside world. The introduction of electricity only a few years ago has also made a difference to the community, which makes a living out of fishing.

As we are motoring down the river another boat comes towards us and pulls up alongside. There is a tourist on the other boat who met Percy seventeen years ago whilst out on a National Geographic trip and remembers him well. I realise Percy is quite a celebrity as he tells me he has often taken biologists and scientists into the jungle. He is also friends with and been filmed with Jack Hanna, a renowned American zoo Keeper and TV personality. I tell Percy about my meeting with Minister Ted and his group in Belize City and he is happy that I met his friends. 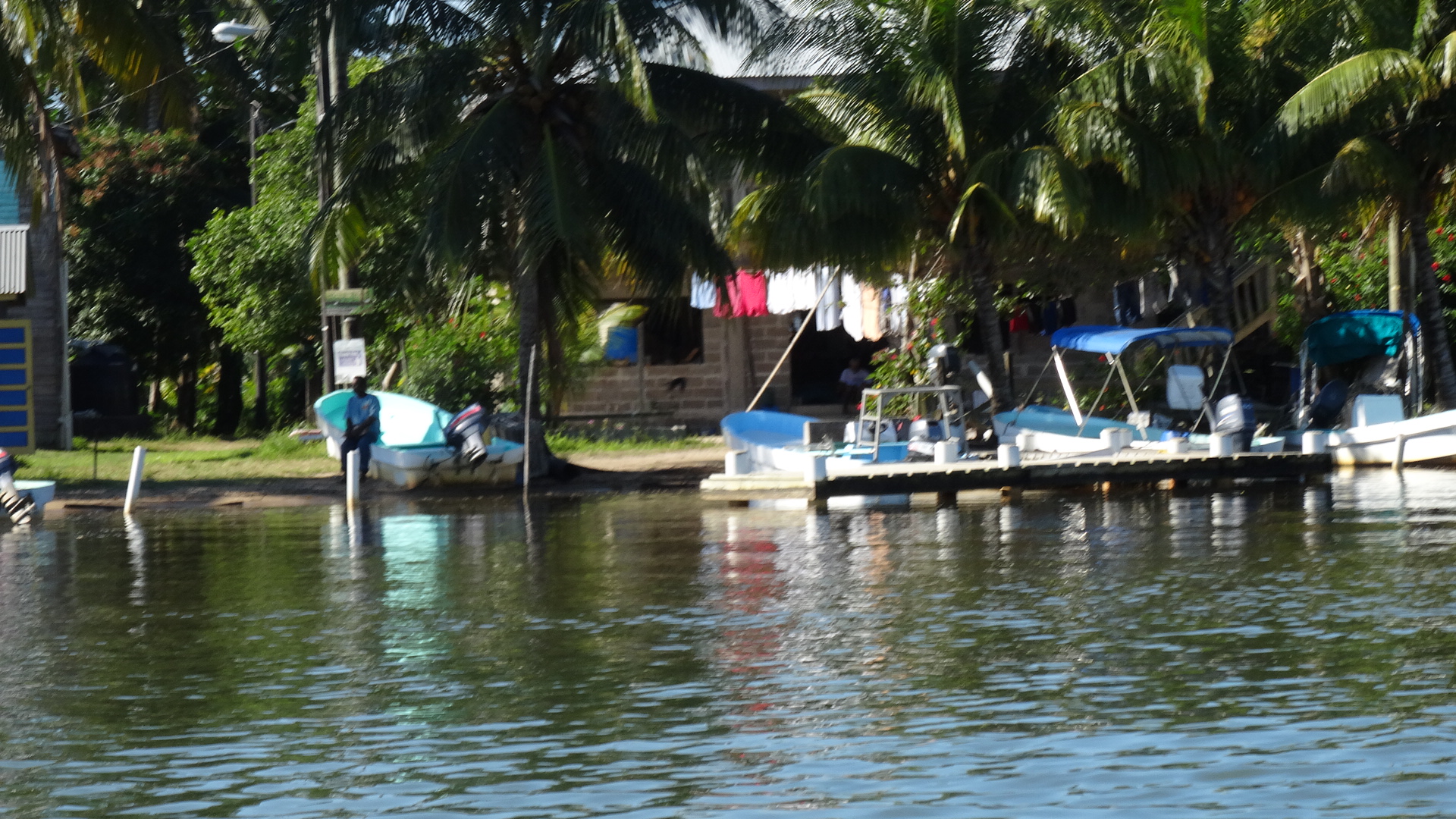 We finally disembark at Monkey River Town and I am delighted! Unfortunately, we don’t have time to explore much of the village, but Percy points out the village hall where they all sheltered during Hurricane Iris as we walk through the grass to his sister’s house where we are warmly greeted and served the best chicken with rice and beans I have tasted! 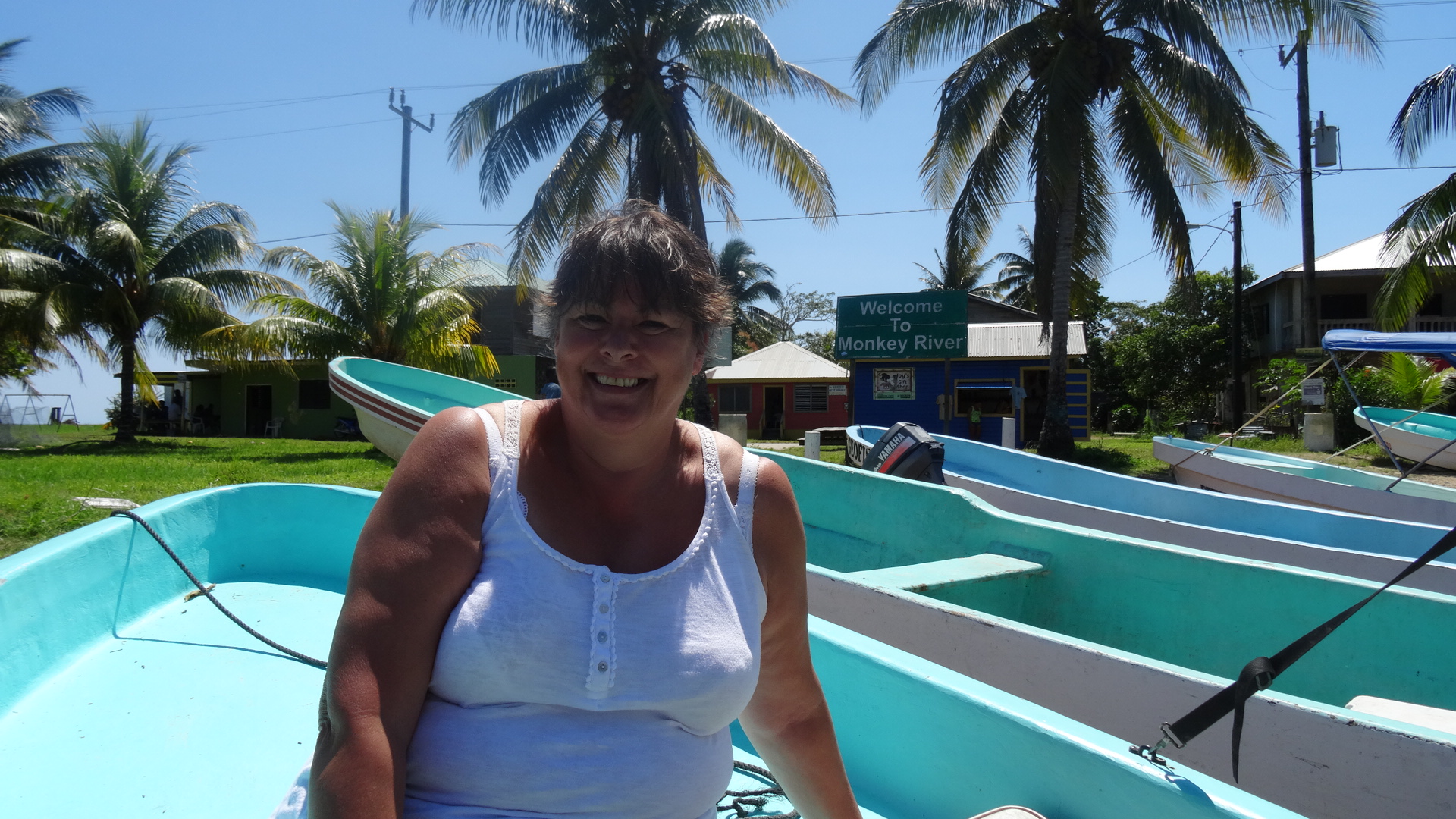 Later I ask Percy about the Hurricane. He tells me that he and his wife lost almost everything and others were even worse affected, including his wife’s parents. The whole village sheltered in the Town Hall which is built of concrete and made to withstand the hurricane storms, but their wooden houses were devastated. When I ask Percy how long it took them to get over the devastation he becomes very serious and quietly replies. “We’re still not over it Ma’am, but we are slowly getting there.”

Read the full Belize story in “Belize, A Journey Of Discovery, And Some Snorkeling”

← From San Ignacio To Placencia – No Room At The Inn!
In Munich For Easter! →

1 Comments on “Monkey River Town and Percy – King of The Howlers!”