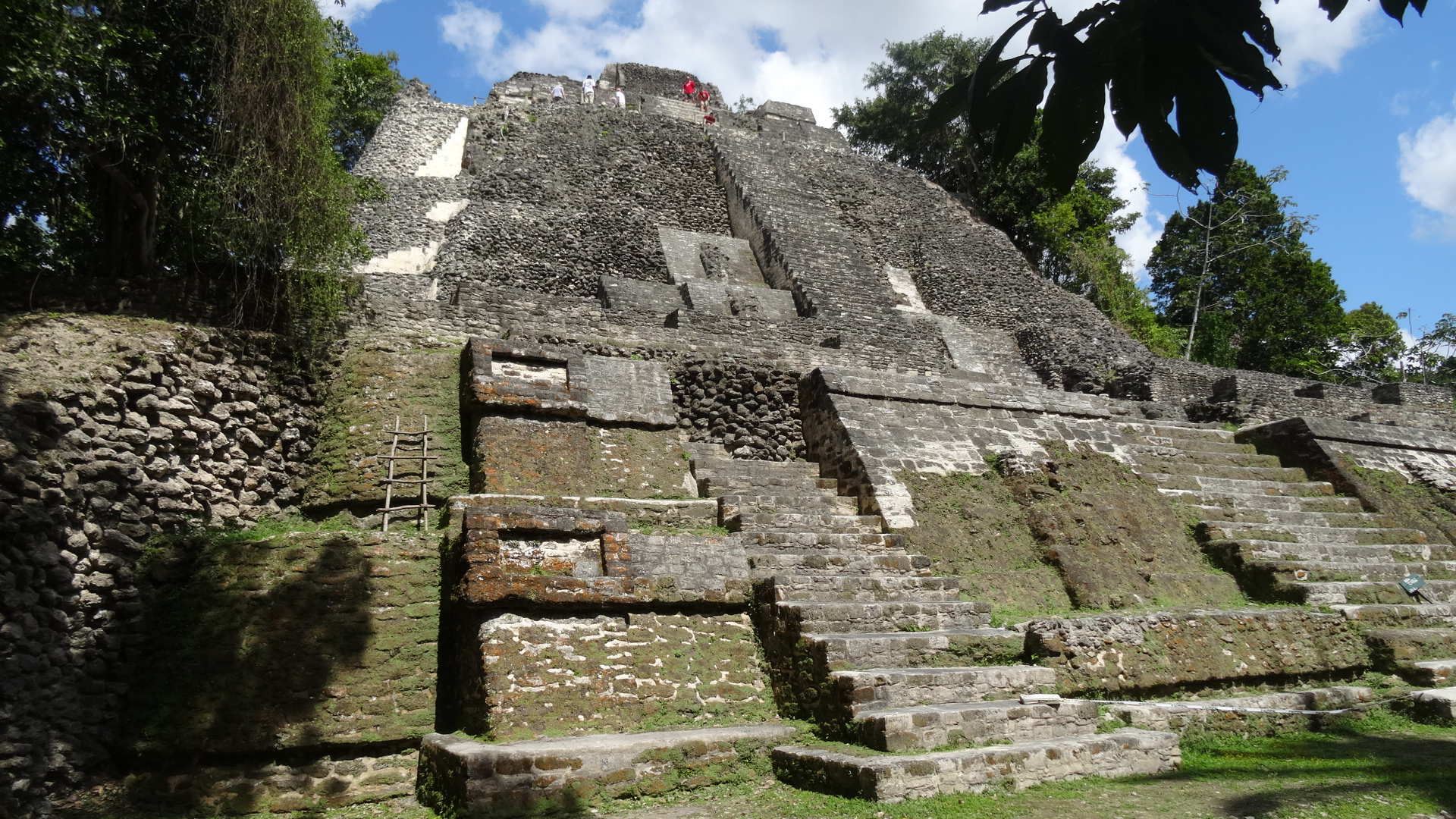 Orange Walk, Lamanai And The Lottery

I’ve come to Orange Walk to visit Lamanai – one of Belize’s most heralded Maya sites and I’ve heard that you can access it by river from here. I think this will be a good way to see a little bit of the jungle as well as Lamanai. 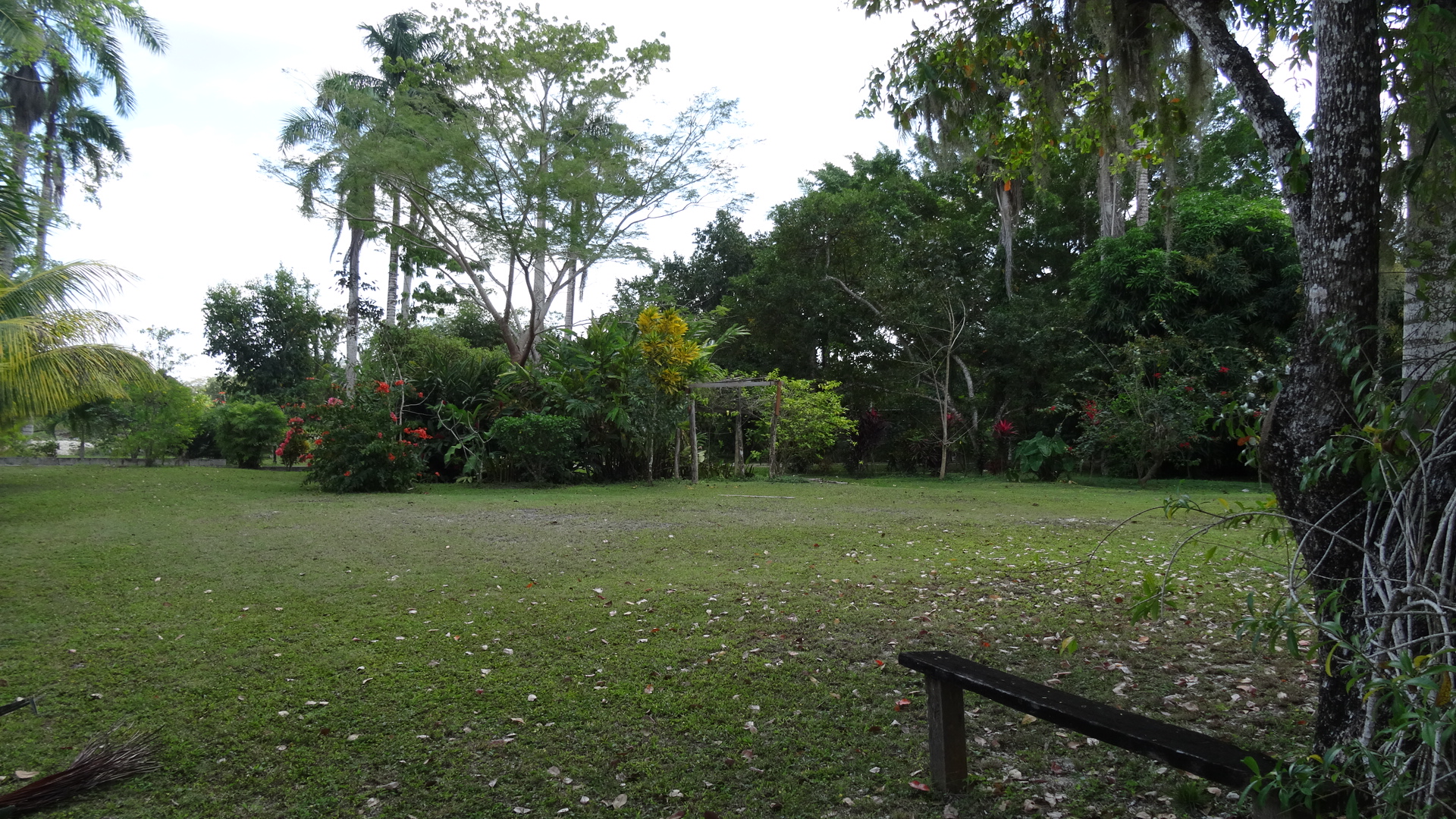 I’m staying at the St Christopher Hotel which has gardens backing on to the New River which I will be travelling on tomorrow. I spend some time in the garden taking in a little bit of the scenery. It is indeed a jungle backdrop and the garden is full of tropical blossoms and dense greenery and it is rich with brightly coloured birds and butterflies merrily gowing about their business. 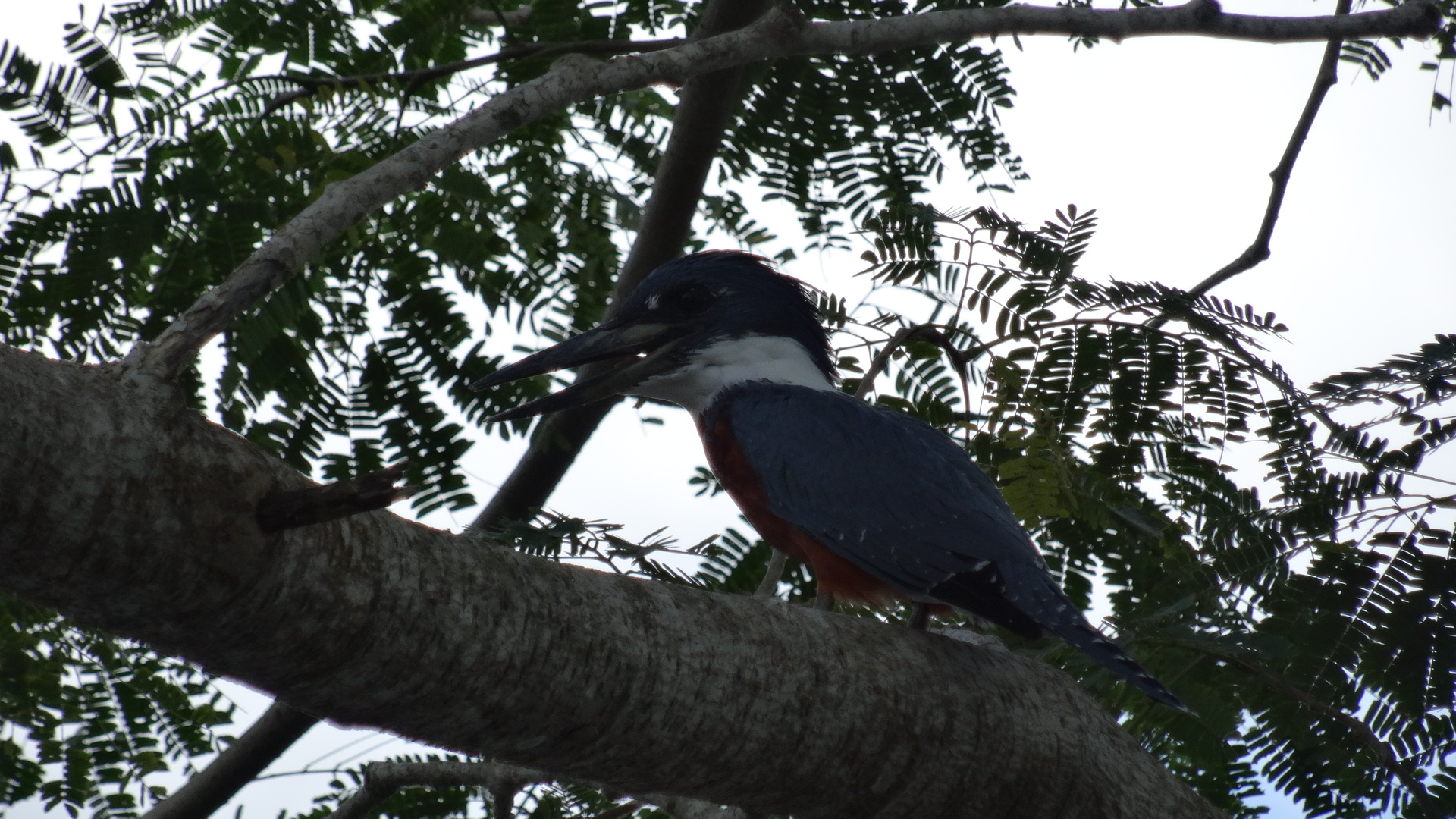 The river looks brown and menacing and I imagine a multitude of crocodile eyes peering hungrily at me from the darkness of the mangroves. 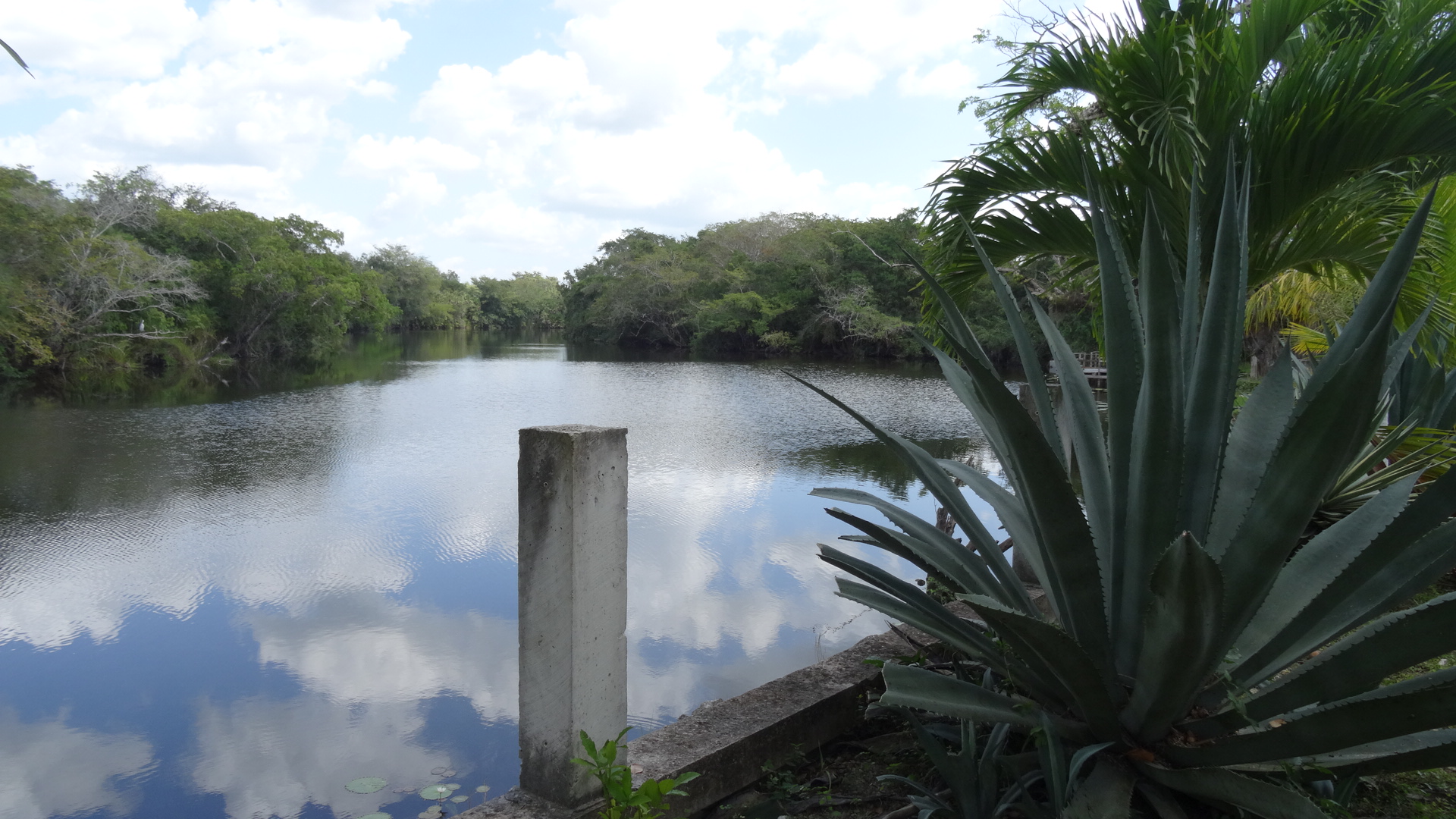 Later I have a stroll through town, I know that this is a sugar cane area and the town’s nickname is “Sugar City” so I am not surprised that it is a working town and does not especially cater to the tourist trade. There are a few restaurants, but they are mostly Chinese and are quite basic wooden shacks with no frills. I don’t see any inviting bars to sit in where I might chat to the locals and catch up on my blog, as has been my routine, so I soon retreat to my room. 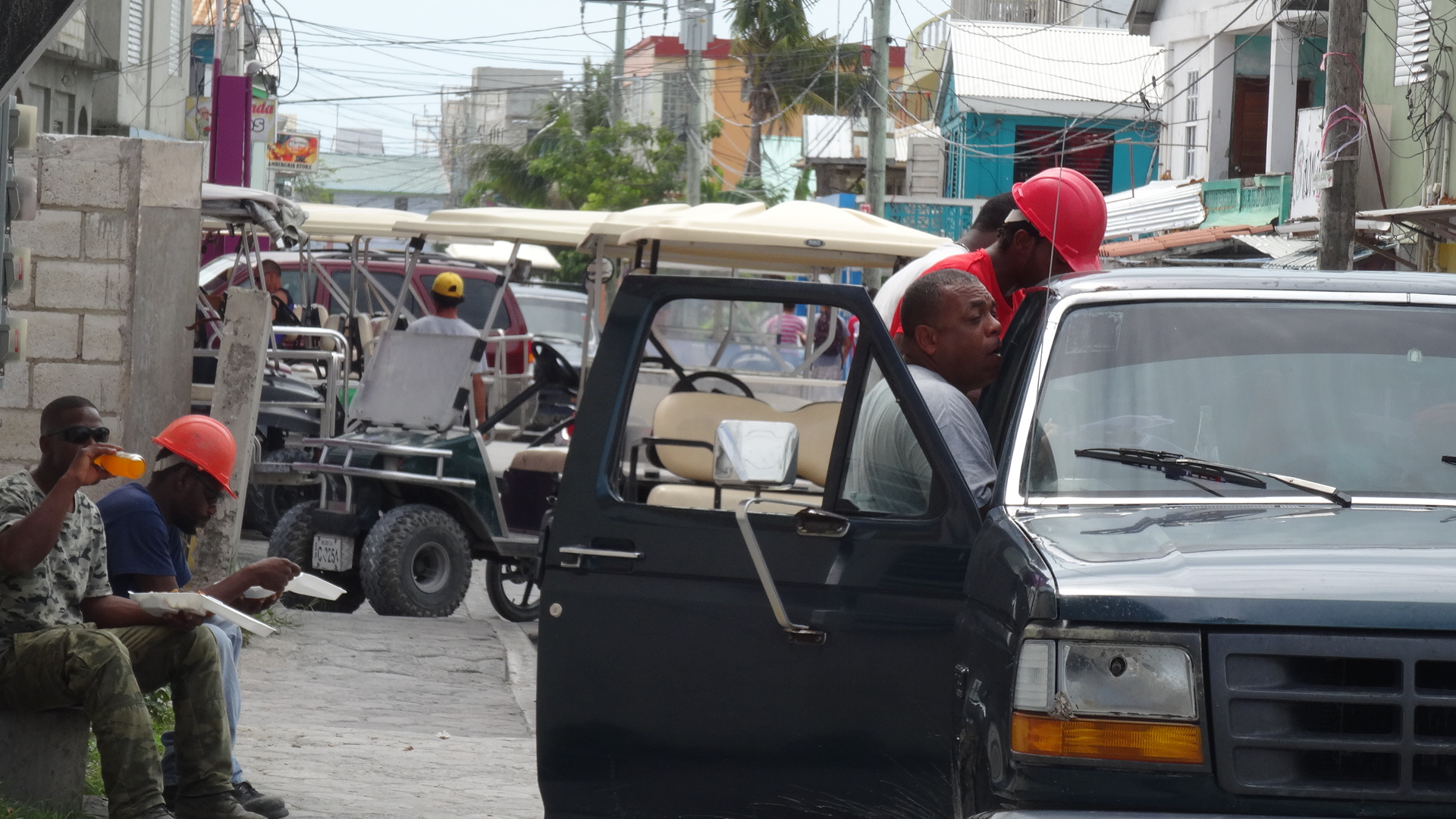 The St Christopher Hotel is well run and very clean. I’ve been able to book my Lamanai tour at the front desk when I checked in and my room is spacious and cool with fans that rotate so fast I am in fear of the blades flying off in the middle of the night and decapitating me in my sleep!

Less than inspired by the restaurants but in need of something to eat I later go back out into the town to forage. I stumble upon a “takeaway” shop which seems to be very popular with the locals and I take this as a promising sign. 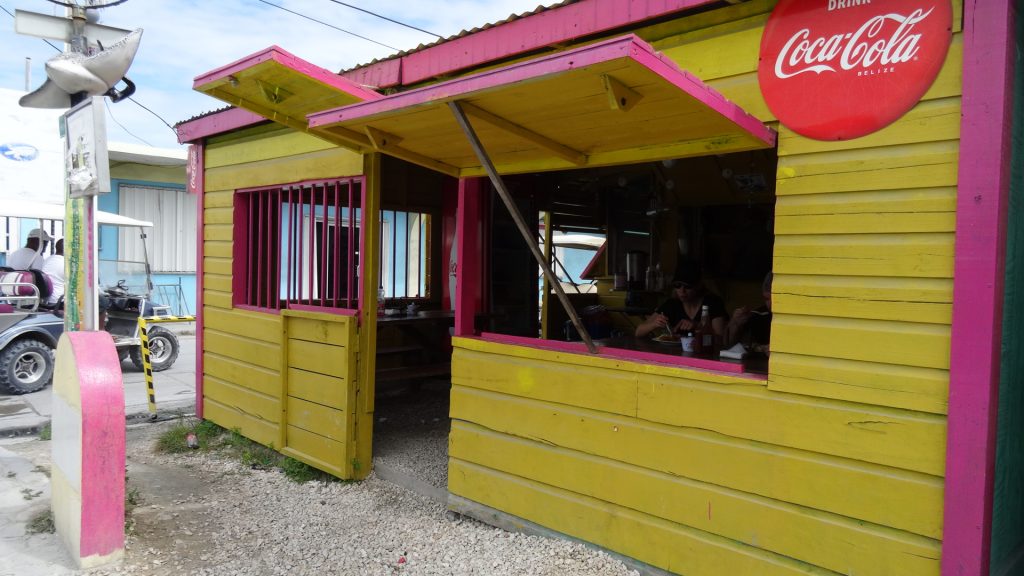 This appears to be the Belizean equivalent of the British Chippie/Chinese Takeaway. The menu is extensive and covers everything from burgers and pizzas to chicken curry and sweet and sour shrimps! The only thing missing is mushy peas!

It is nothing more than a wooden shack with a metal corrugated roof and has the mandatory high counter that universal takeaway shops appear to require. I feel like “Kilroy” as I peer over the top of it on tip toes to give my order of sweet and sour shrimps with rice to the young man taking orders.

I can see into the back of the shop where the cooking is happening and note a range of large woks all sitting over the gas flames of various burners. Having once owned a chip shop I am intrigued by the cooking procedure and watch the cook work back and forward between the various woks. I see that one is for deep frying battered items, another is for cooking chicken and other meats, while more appear to be used for the sauces. Somewhere out of my vision I think someone else is in charge of the burger and pizza factory! 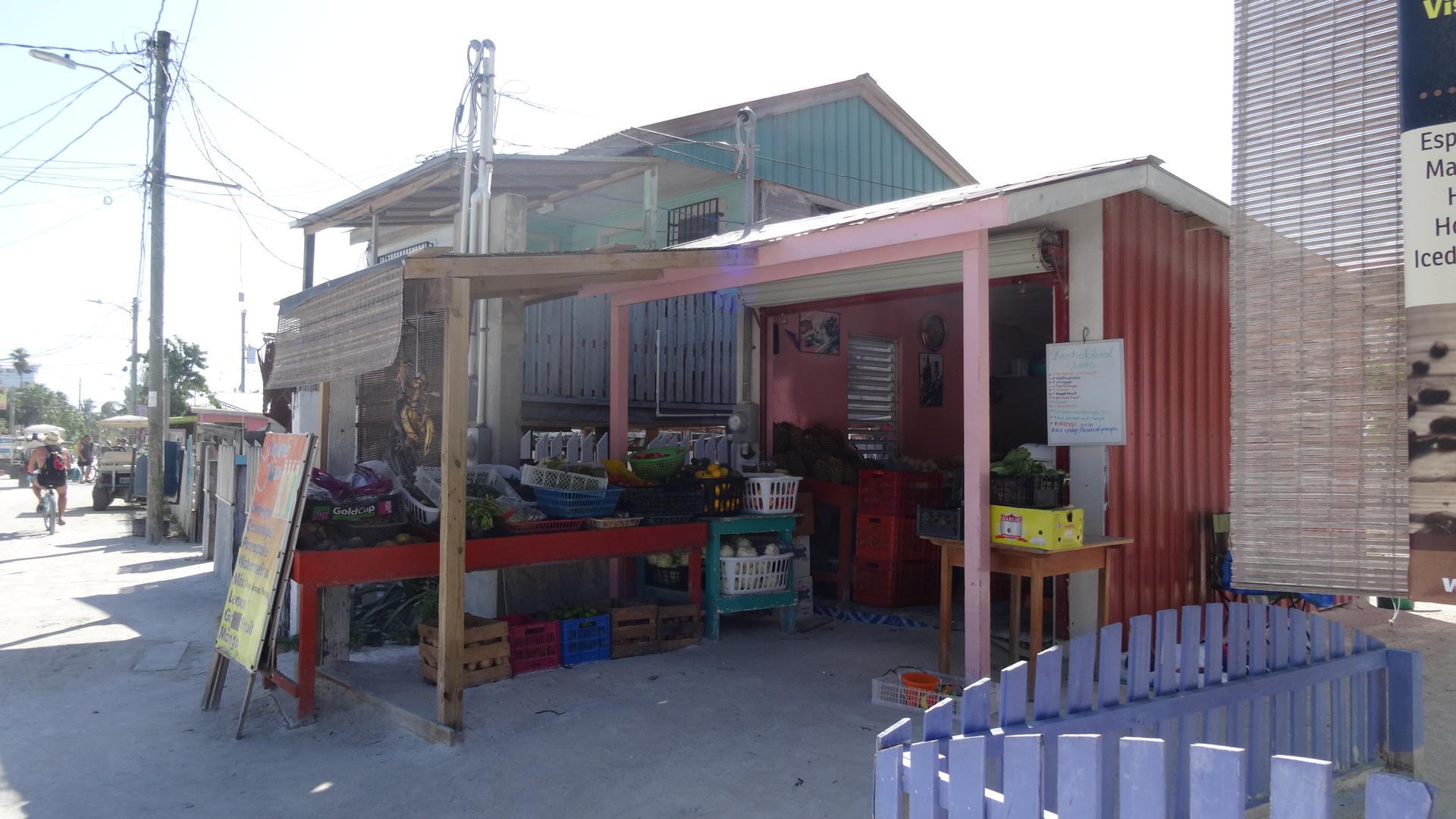 It is a really busy little place and like all good takeaways cooking from fresh, waiting time is forever. There is a small counter ledge around the perimeter of the waiting area and a few high stools are provided. Some people sit and eat their takeaway at the counter ledge. Others perch on the stools drinking a coke or beer while they wait. Like most small town takeaways it is a hub for the locals who greet each other in Creole or Spanish, catching up on gossip as they come and go.

There is a side hatch opening directly out onto the street and it seems people use this to pick up what I assume are their pre ordered takeaways, although I never hear a phone ring so I don’t know how they place their orders.

The whole place is open to the elements. It is hot and humid and bugs fly in at will. Old electrical wires hang lose, there are gaps in the floor and walls exposing the exterior and the back of the shop looks dingy and greasy. British Health Inspectors would have a field day but I put my faith in the locals’ choice and don’t worry too much.

As I arrived at the shop I noticed just at its entrance a lady on the footpath sitting at a small wooden desk. There are some notepads and bits and pieces on the desk and as I wait for my takeaway I watch with growing curiosity as people come up to her, chat a moment or two while she writes something down, then they hand her some money and leave.

When my takeaway finally arrives and I leave the shop I stop and ask her what she is doing and she quite happily explains that she is selling the lottery!! People are giving her their numbers which she writes down and the draw will be announced on the radio later. On Sunday’s the jackpot is doubled! 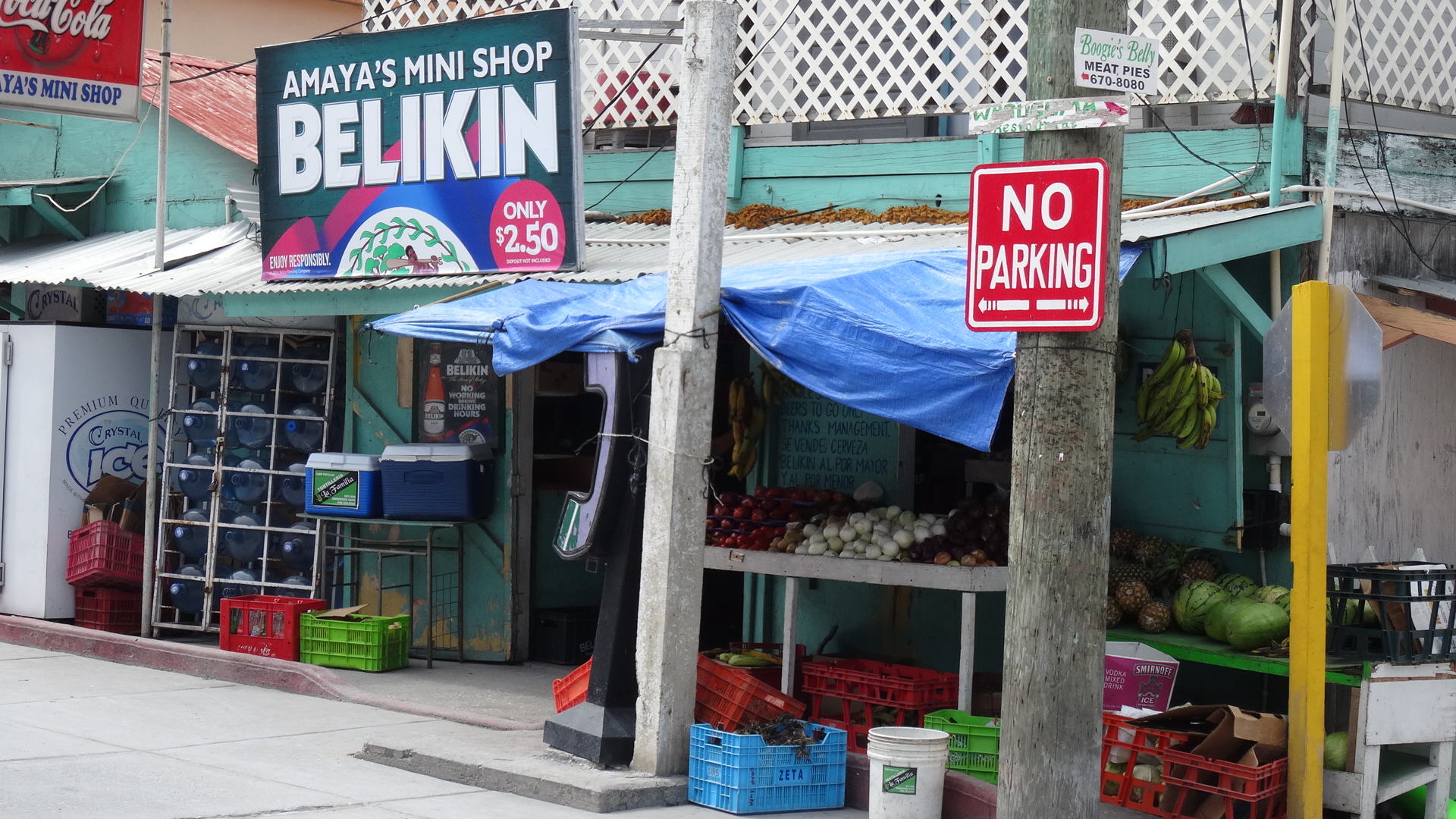 I really wish I’d had my camera with me to capture this whole experience and wonder how the lottery can possibly be regulated.

The following morning I have no ill effects from eating my takeaway, which was delicious, and I am picked up at the hotel by my guide for my Lamanai tour. There are three of us travelling with him from the hotel. My other companions are from France and we are soon speeding along the bumpy road in the guide’s old jeep towards the river jetty. 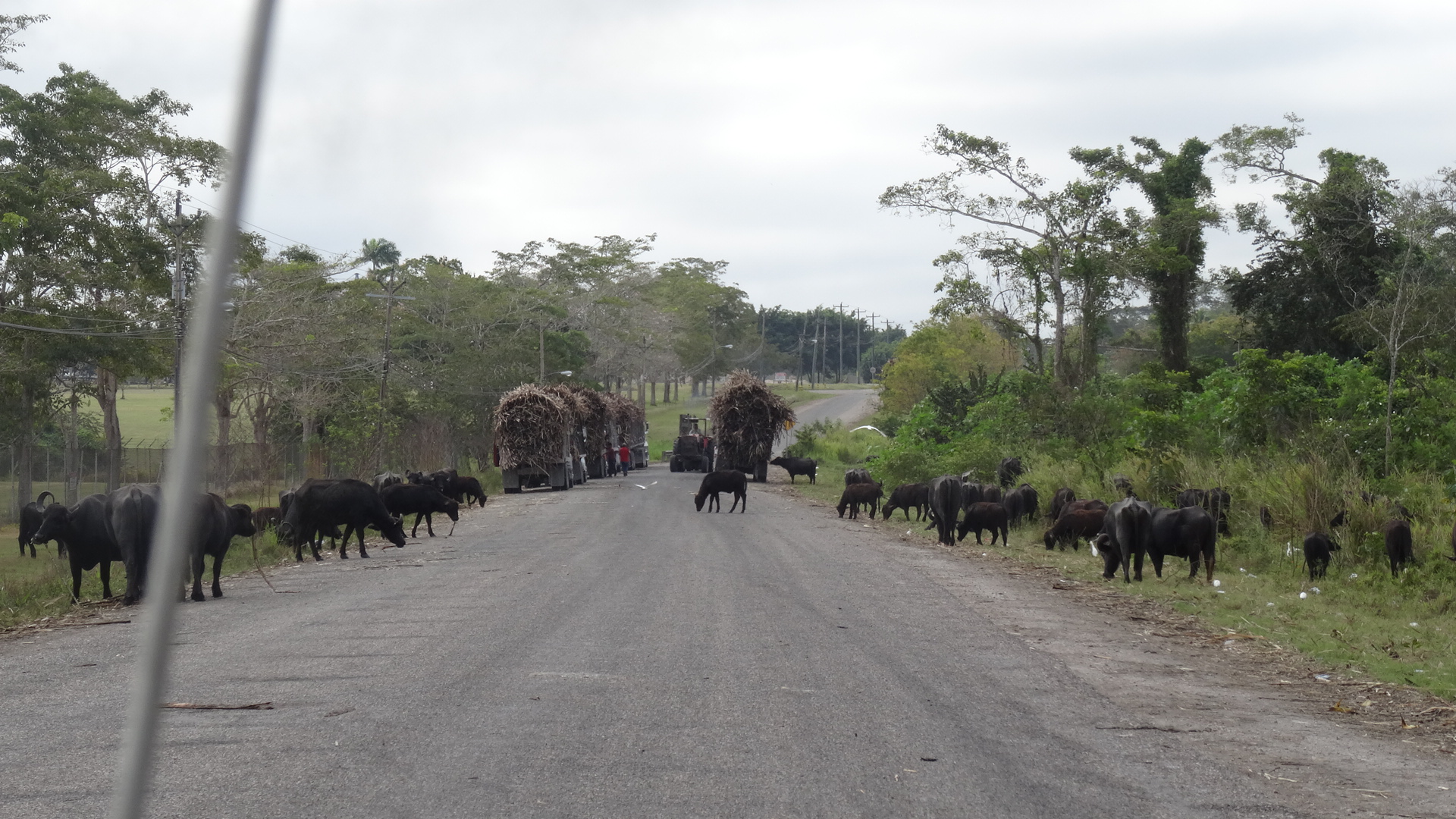 Along the way we are delayed by a heard of buffalo who have decided to wander on to the road, attracted by the cane trucks which are parked up waiting their turn to offload at the refinery.  The rest of the people on the tour who join us at the jetty have come all the way from Caye Caulker early this morning taking first the water taxi to Belize City and then a private mini bus to Orange Walk. 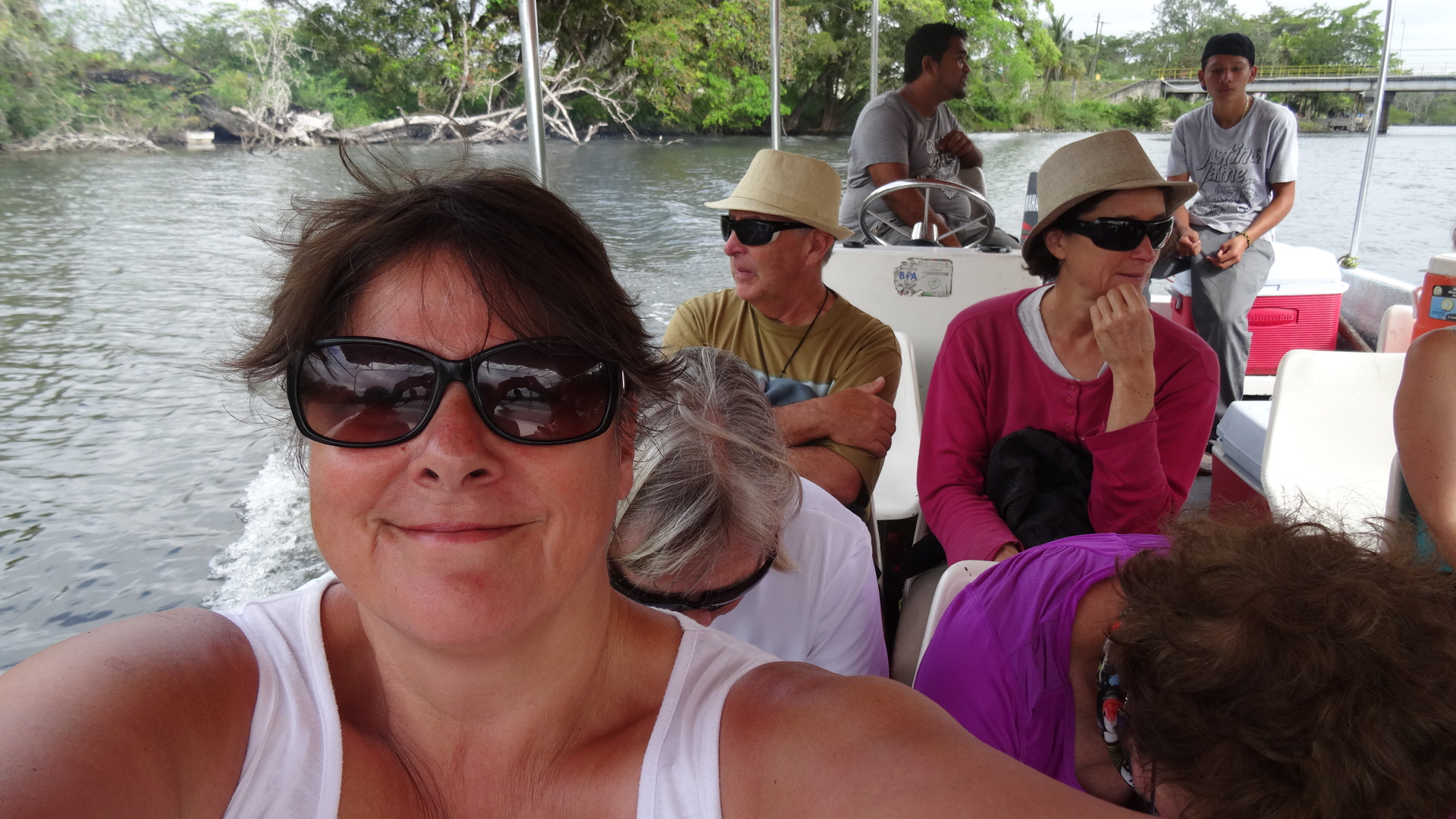 Soon we are motoring along the river and our guide points out wildlife as we go. 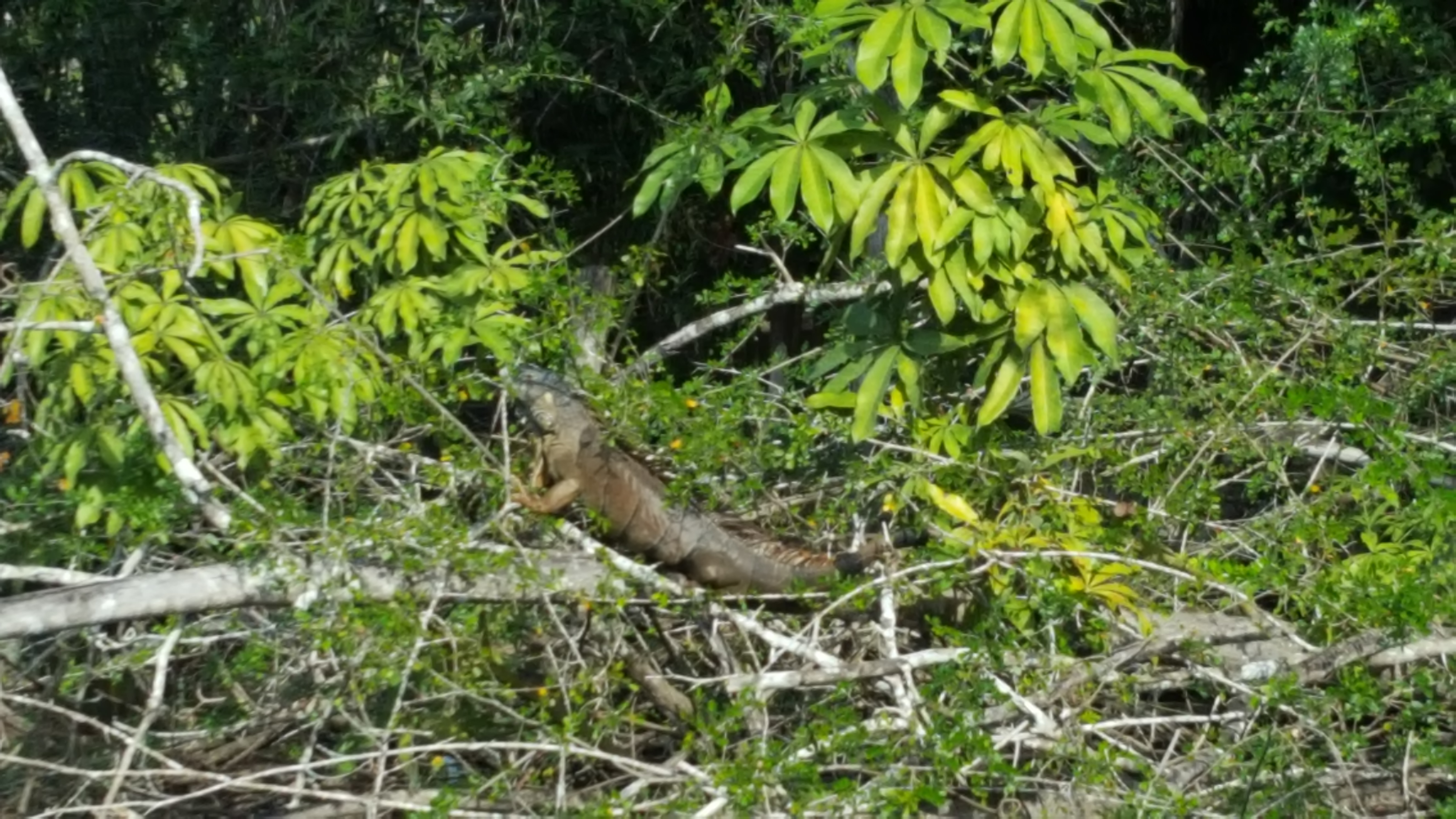 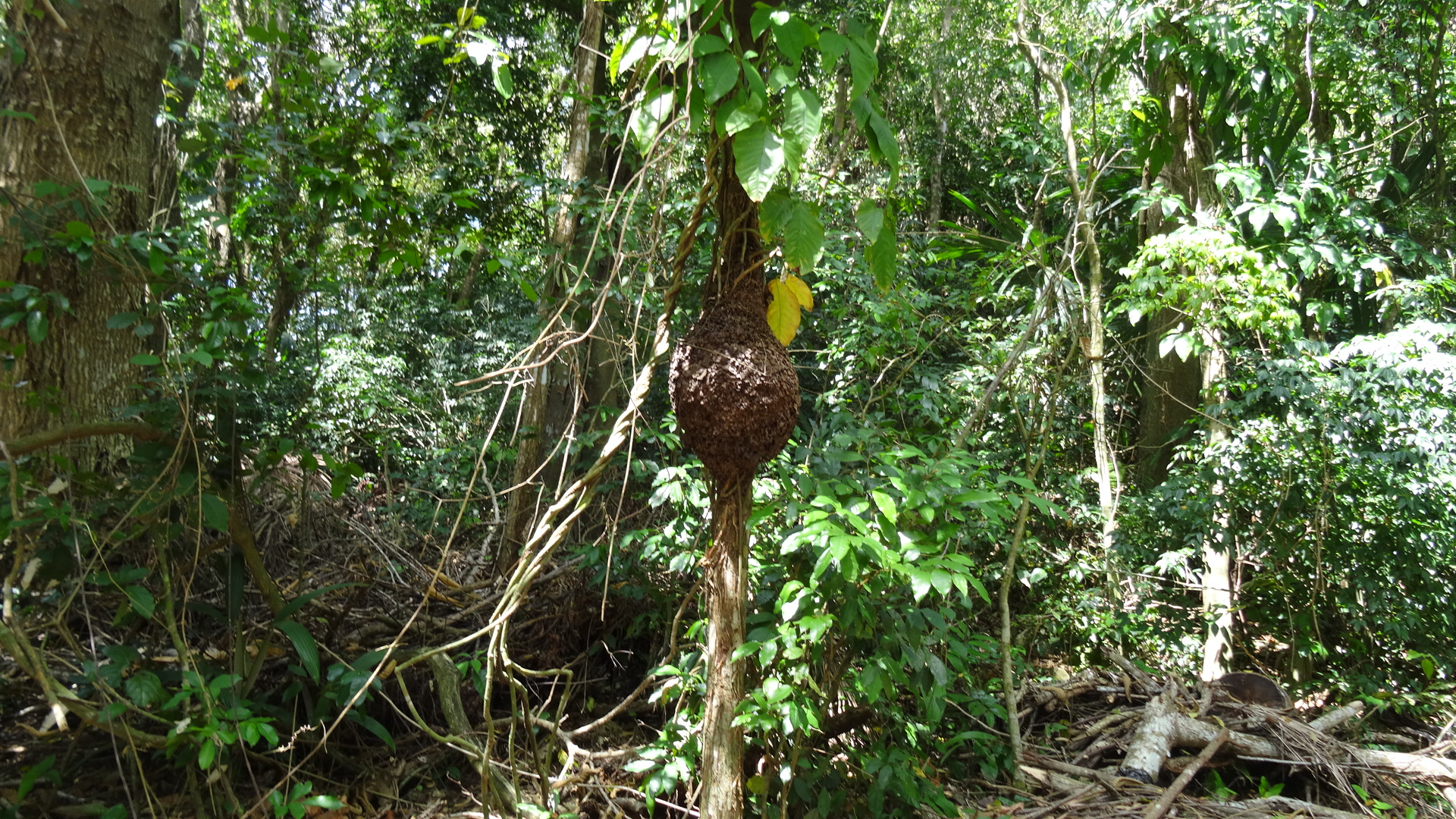 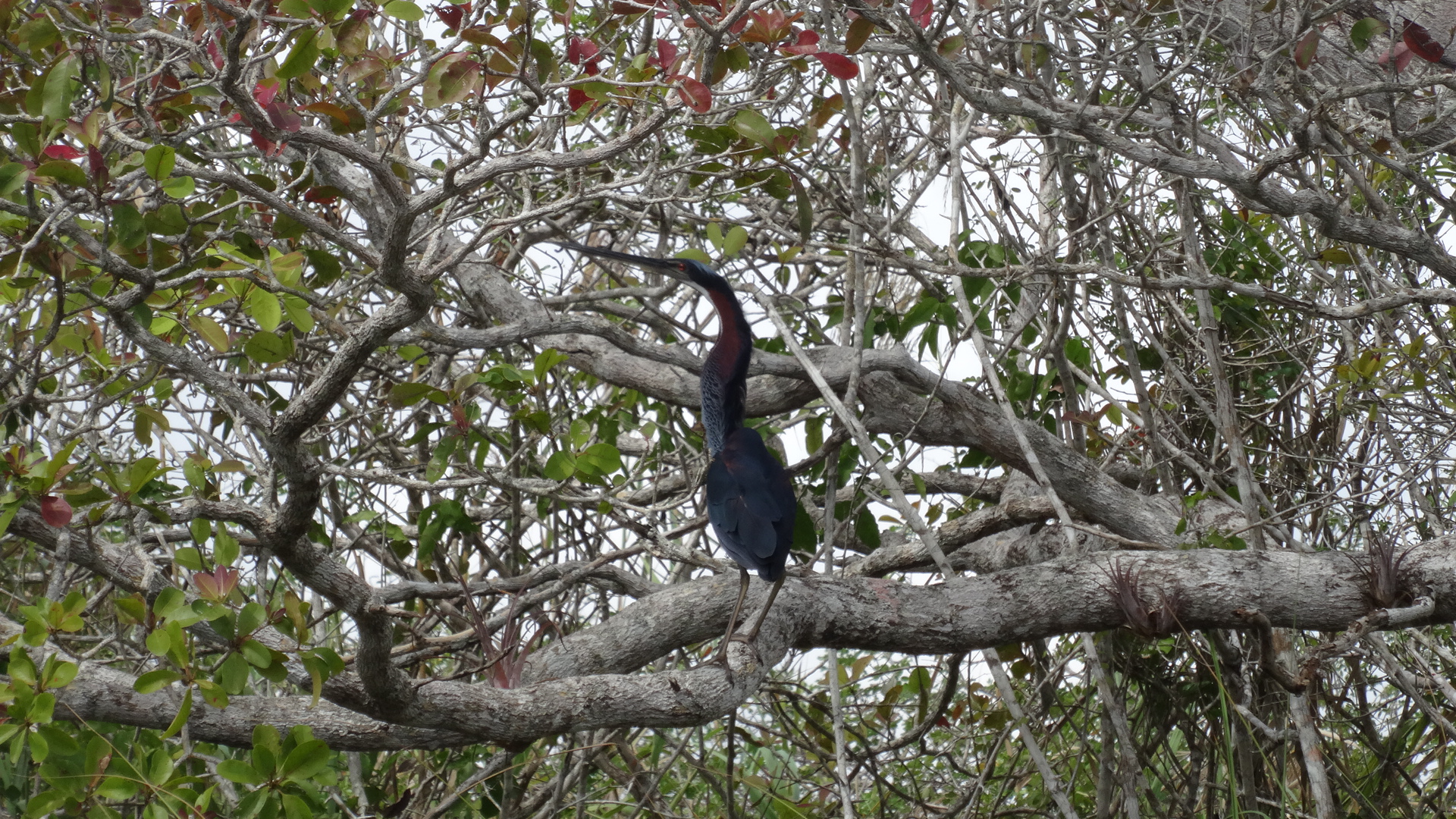 He has lived in Orange Walk all of his life and is very knowledgeable in both the jungle life and Ancient Maya history. The river and its shores are bountiful with wildlife and we see all sorts of animals including an assortment of water fowl, termites nests, a baby crocodile, a goanna, a turtle and a jungle marsupial. 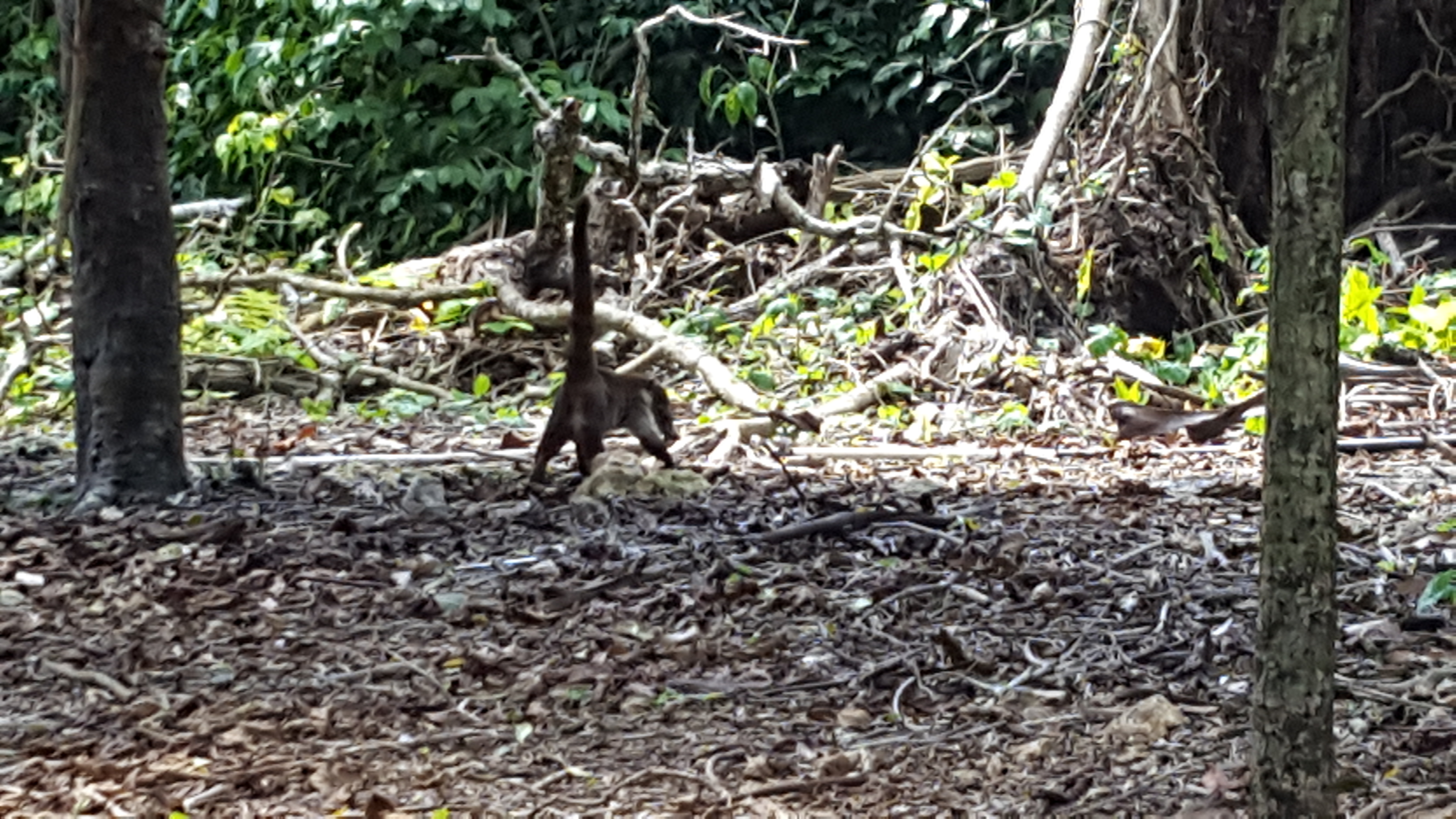 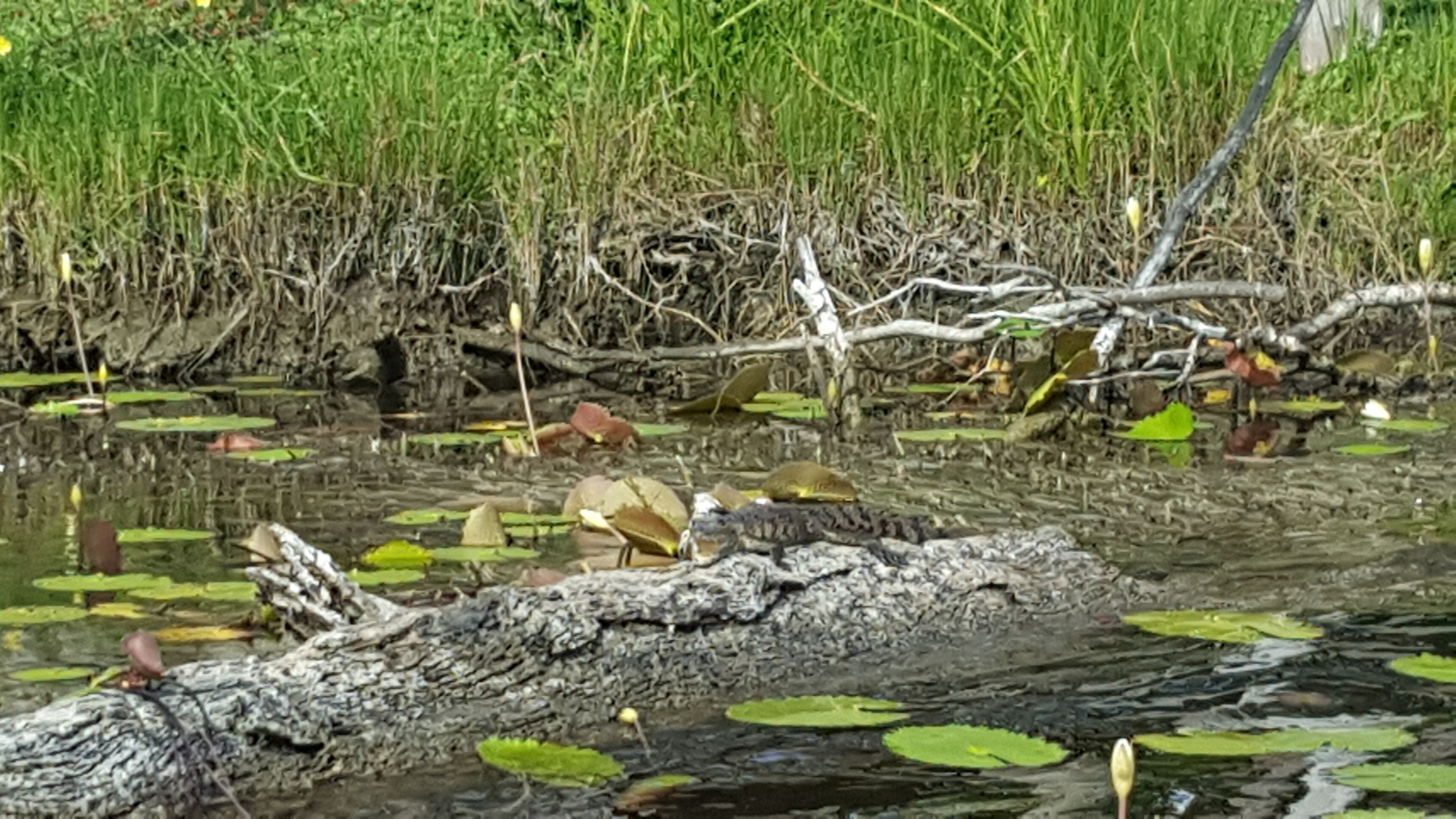 Finally at the Mayan site we get to hear the famous territorial roar of the howler monkeys as we watch them swinging through the trees.

When we first hear their ferocious roars reverberating through the jungle we can only imagine enormous aggressive apes, but when we finally spot them high up in the jungle canopy we cannot believe that this deep extremely intimidating noise is being generated by these little, rather cute black monkeys. 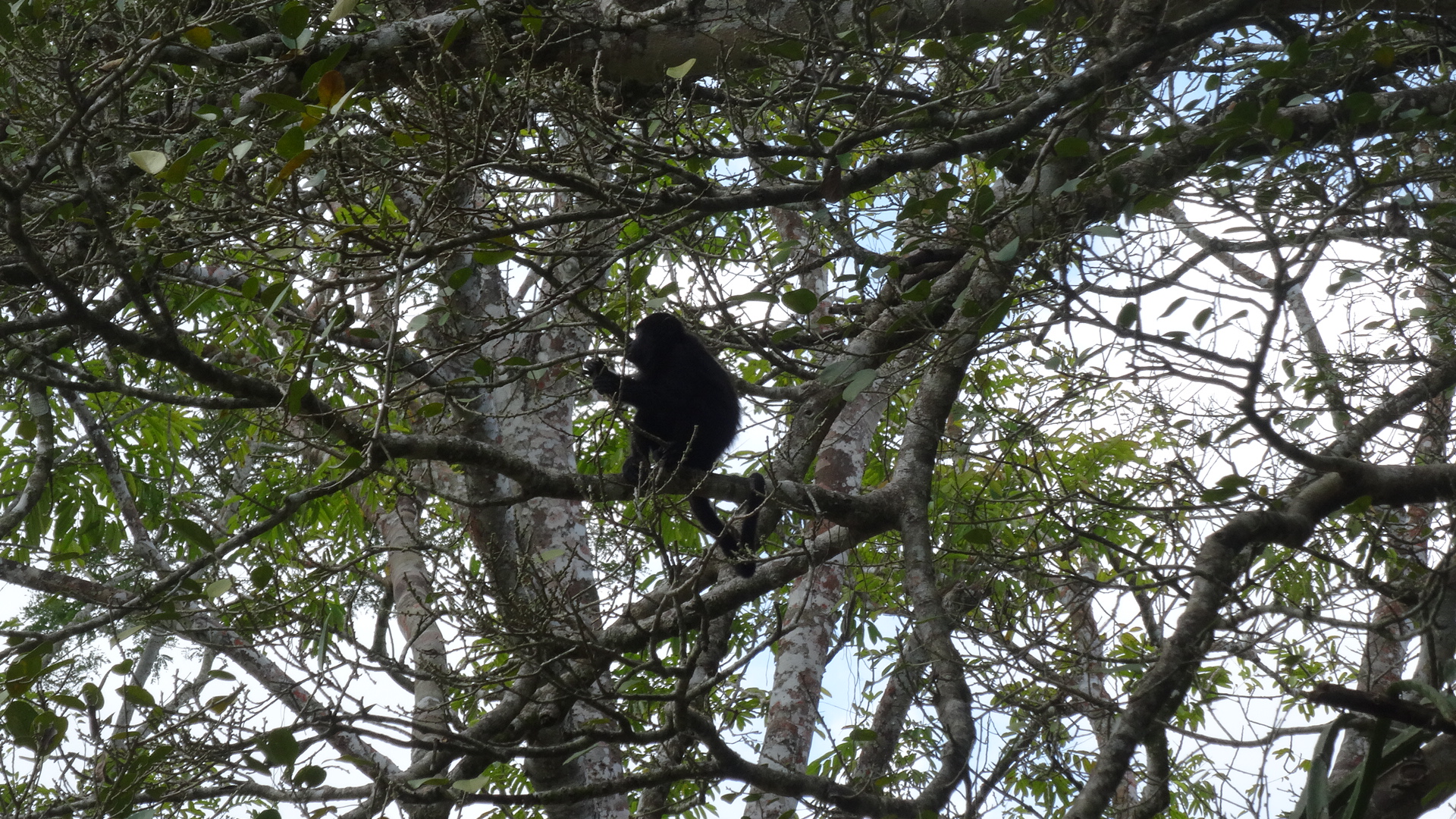 I’m not surprised when our guide tells us that their roar was used in the Jurassic Park Movies and it is not difficult to imagine a nasty Tyrannosaurus Rex smashing its way through the jungle undergrowth on its mission to devour us tourists.

Our guide also points out a local Mennonite Settlement. The Belizean Sect of the Mennonites apparently originated in Canada and came to Belize in the 1950’s. I’ve seen a few of them around and they are conspicuous by their clothing – the men wear dungarees and straw hats, while the women wear bonnets and long skirts. 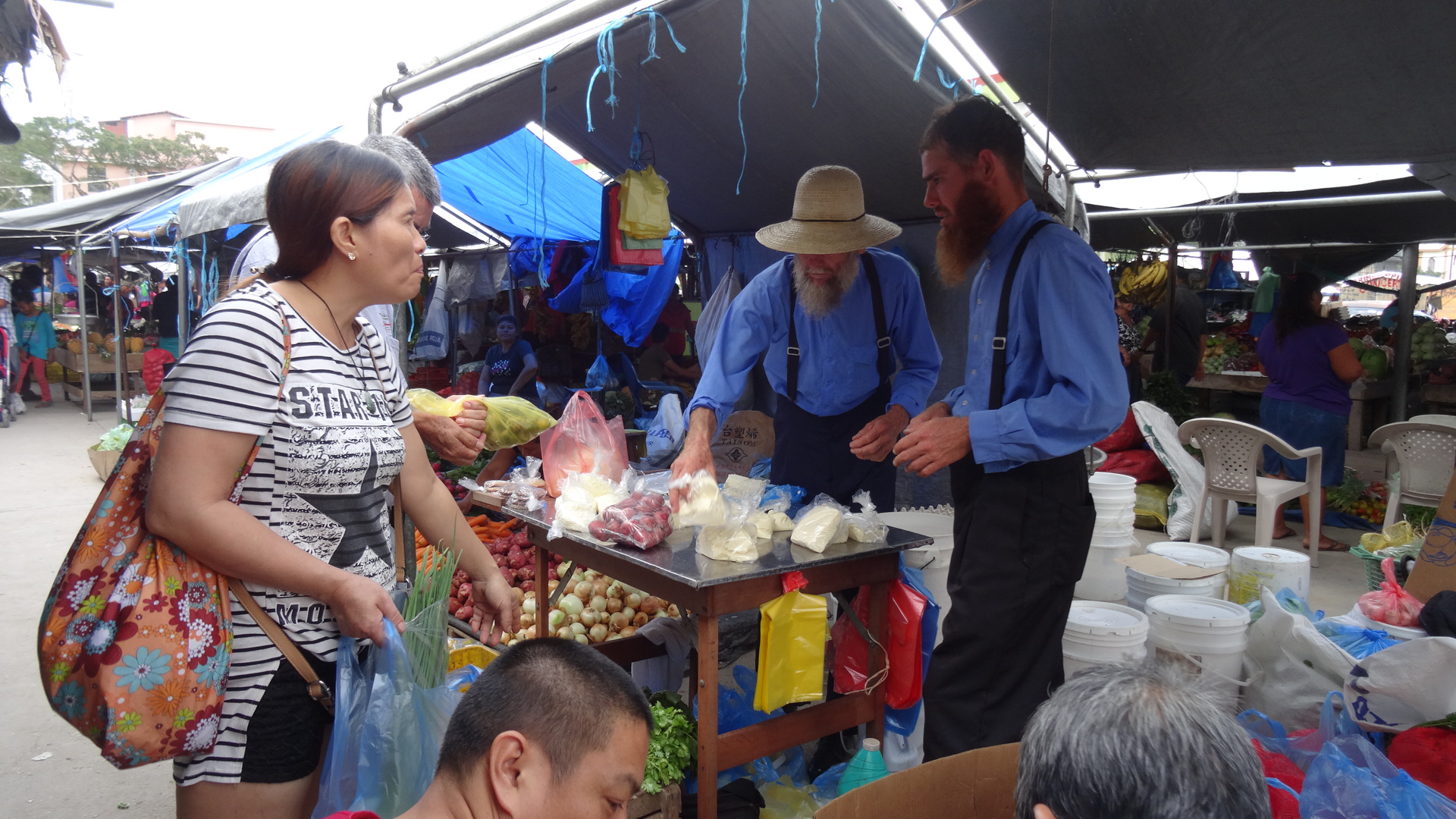 Most of the communities live a very conservative lifestyle although I am told that they are becoming much more progressive. Their main language is a kind of German and they produce 70% of Belize’s domestic food including chickens, eggs, rice and vegetables. Belizean’s embrace them and the two communities coexist rather well. 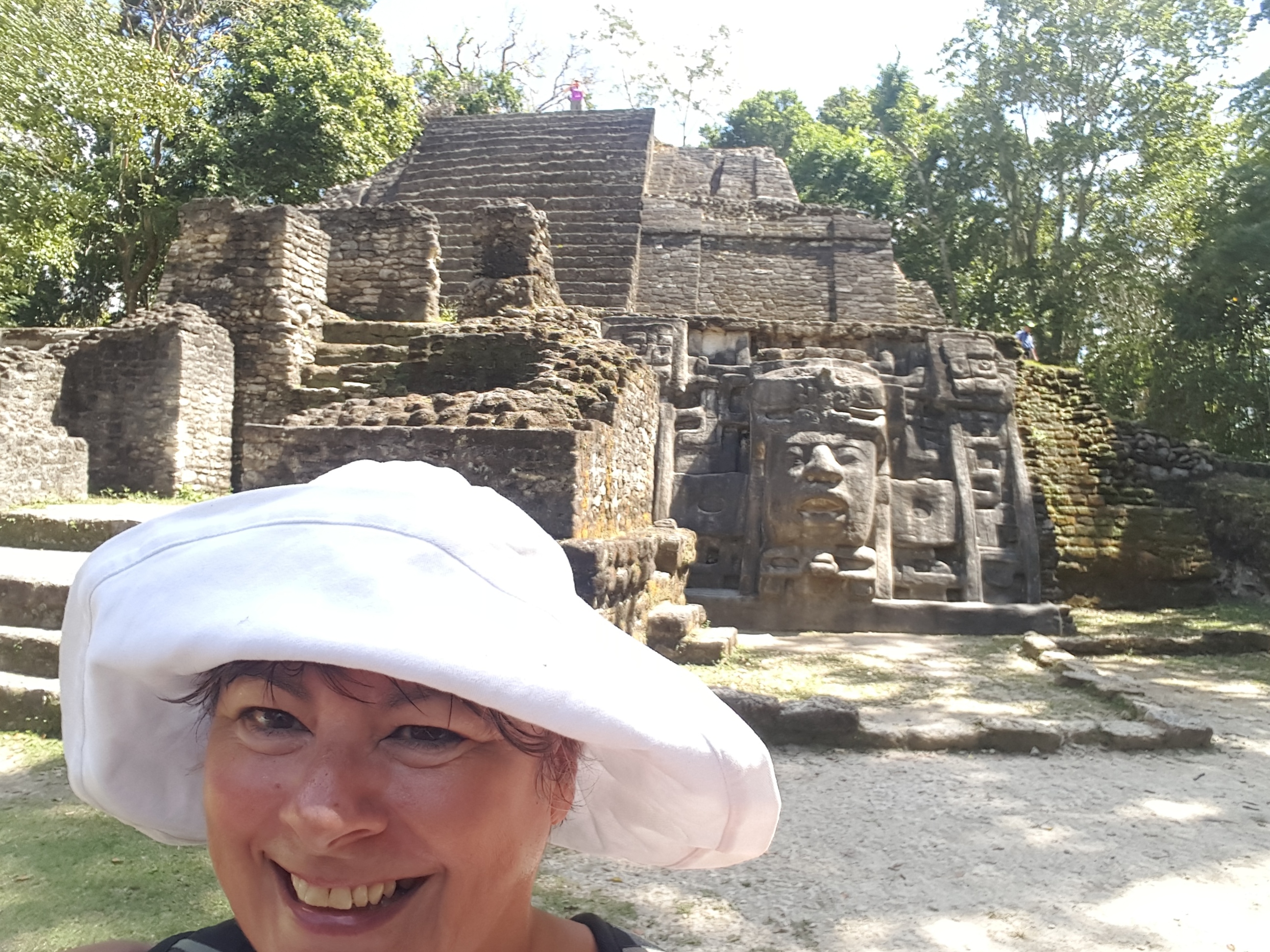 Lumanai is indeed majestic and our guide expertly explains ancient Mayan life to us as he takes us around the extensive site. 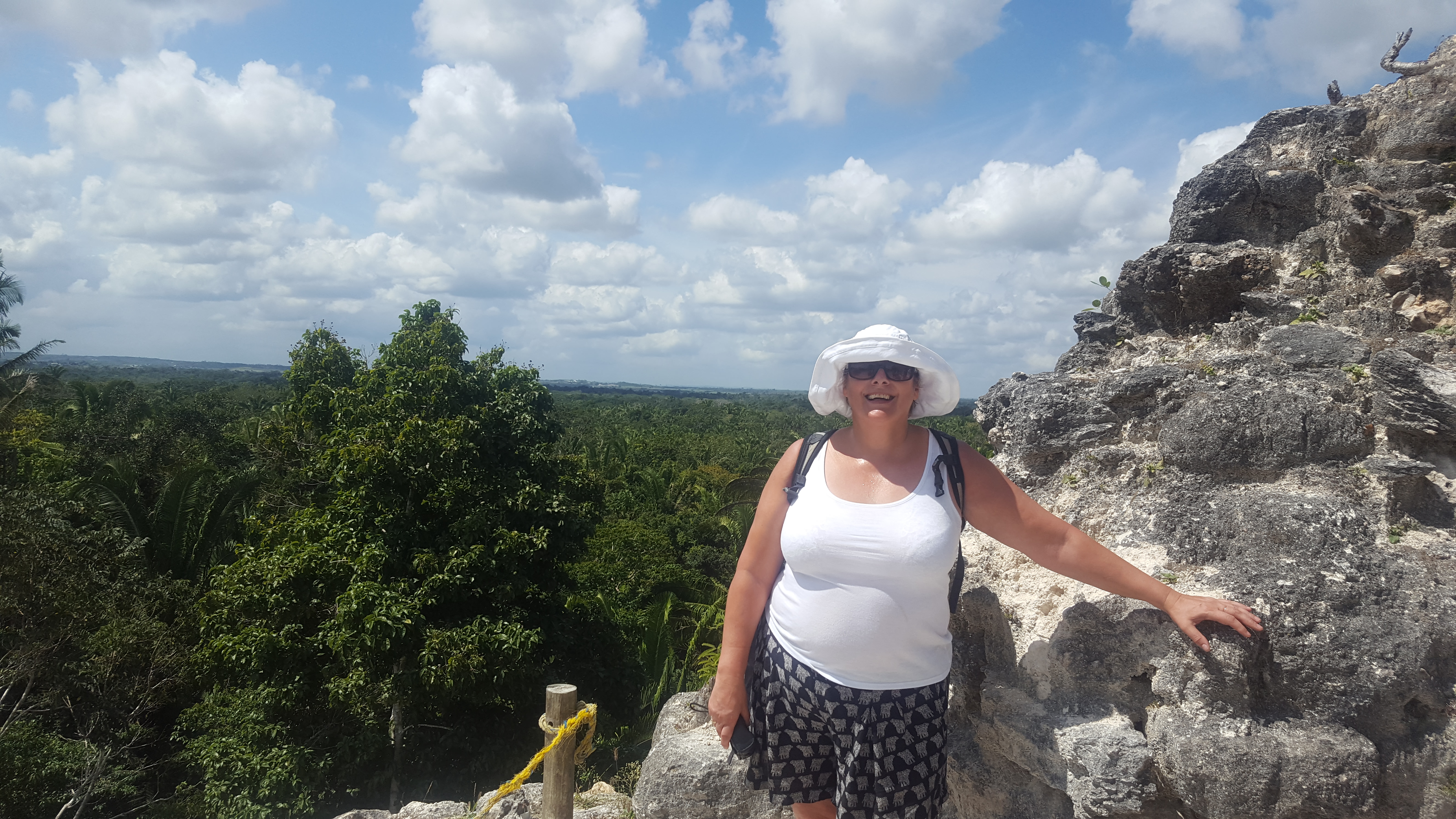 I climb as much as I can of the main pyramid, but the steep high steps play havoc with my vertigo and when I get to the two thirds point I refuse to go any further happily taking in the views from this point while the others climb the last little bit to the top. 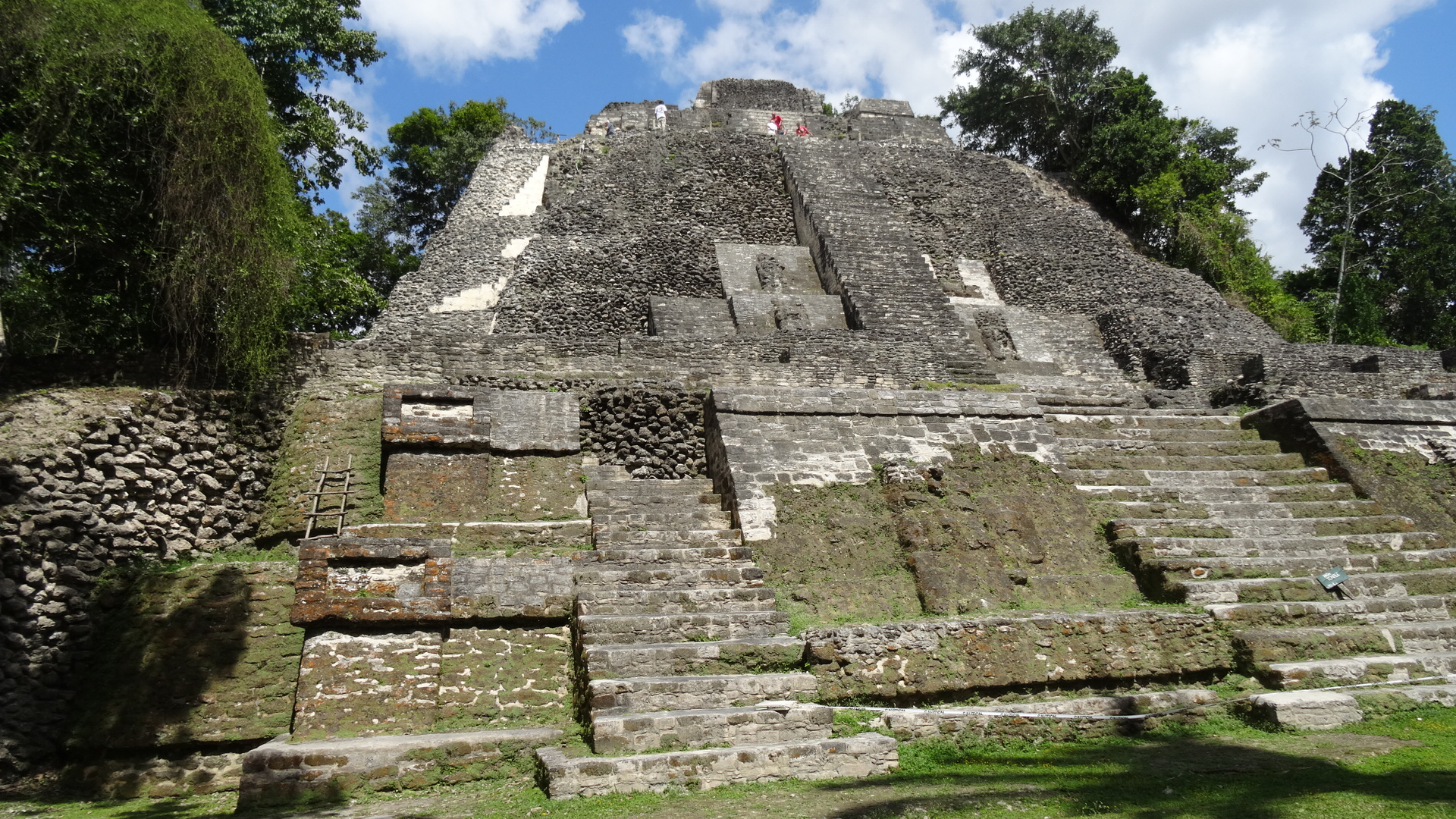 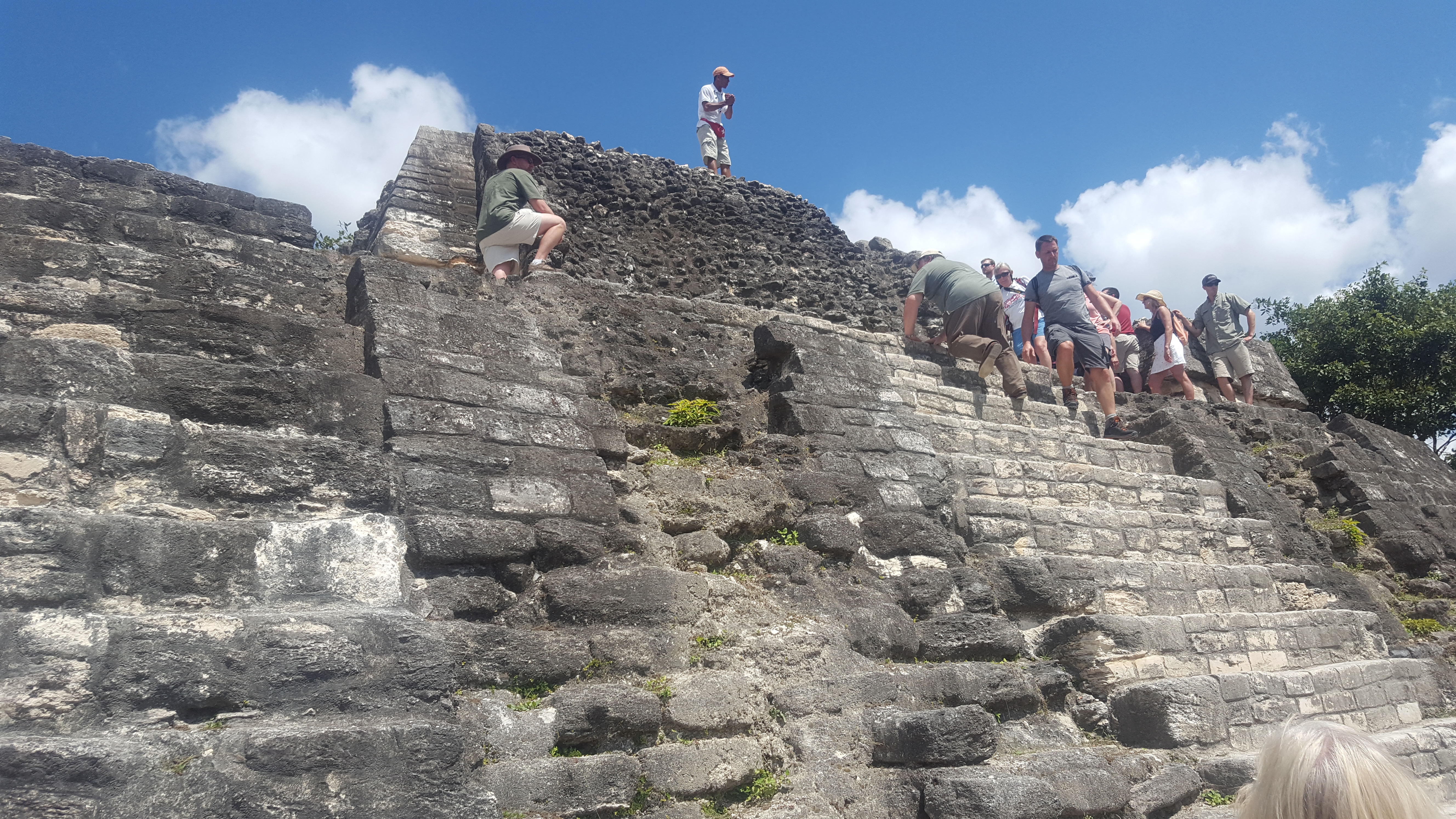 Back at the hotel I talk a while with Bob and Flo from Virginia, although Flo is originally from Peru. We swap travel stories and Bob remembers his time in London with fondness when he was posted there with the US Army a very long time ago. We discuss Trump and I’m yet to meet someone who voted for him or knows anyone who did. Bob and Flo have done a lot of travelling throughout Central America and other places around the world, but regret that they booked eight days in Orange Walk!! They’ve hired a car and are making the most of it and it is easy to get to most points of interest as Belize is so small, but I’m glad I’m only staying two nights and bidding them farewell I go off to pack my backpack once again.